ICYMI: Preity Zinta, Jaya Bachchan, Kajol And Tanishaa In 'One Of The Highlights' Of Filmfare Awards. 'Ting'

Filmfare 2018: Preity Zinta, Jaya Bachchan, Kajol and her sister Tanishaa, attempted to click a selfie together 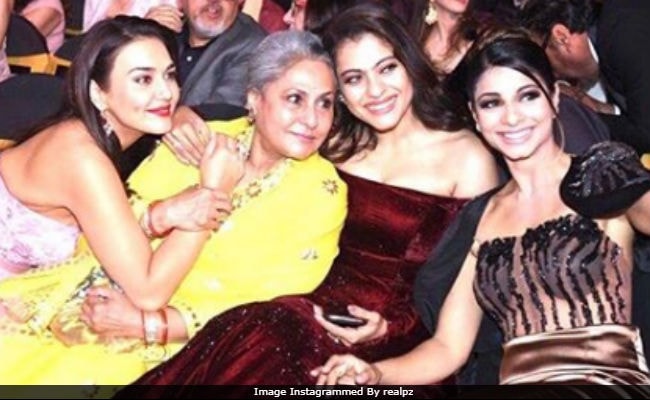 New Delhi: The filmfare Awards 2018 were announced last Saturday. Celebrities like Alia Bhatt, Vidya Balan, Rekha, Shahid Kapoor, Preity Zinta, Kajol, Jaya Bachchan and others attended the star-studded event held in Mumbai. While the winners like Vidya Balan, Irrfan Khan and Rajkummar Rao managed to make the spotlight follow them, Preity Zinta shared 'one of the highlights' from the event and it shouldn't be missed. Preity Zinta, Jaya Bachchan (her Kal Ho Naa Ho Na co-star), Kajol and her sister Tanishaa, attempted to click a selfie together. (Were Preity and team successful? Of course they were, but only after multiple retakes).

"One of the highlights of the evening was to meet my darling Jaya aunty, the super fun Kajol and Tanisha. Here is our attempt at taking and retaking a #selfie #jiofilmfareawards #loveit #madhatters Ting," Priety captioned the post.

See the selfie here and also, their million dollar smile.

Tanishaa also shared another selfie with the actresses and wrote, "So everyone is wondering what our selfie from #filmfare looks like so here it is! Full of love and laughter! We finally did get it right I think."

So everyone is wondering what our selfie from #filmfare looks like so here it is! Full of love and laughter! We finally did get it right I think! #funnights #love #laughter #girlymadness #realwomen #womanpower #womenruletheworld

Promoted
Listen to the latest songs, only on JioSaavn.com
Preity Zinta and Jaya Bachchan co-starred in Shah Rukh Khan's 2003 hit film Kal Ho Naa Ho, directed by Karan Johar. Kajol also made a brief appearance in a song from the film.

Preity Zinta is married to Gene Goodenough, who is based out of US. They married in an extremely private ceremony in Los Angeles in February 2016. She has been part of films like Soldier, Mission Kashmir, Dil Chahta Hai, Koi... Mil Gaya, Veer-Zaara and Kabhi Alvida Naa Kehna.
Comments
filmfare awards 2018Preity ZintaJaya Bachchan