Pregnant Sameera Reddy, Asked About New Moms Being Body-Shamed, Says Not Everyone Is Kareena Kapoor 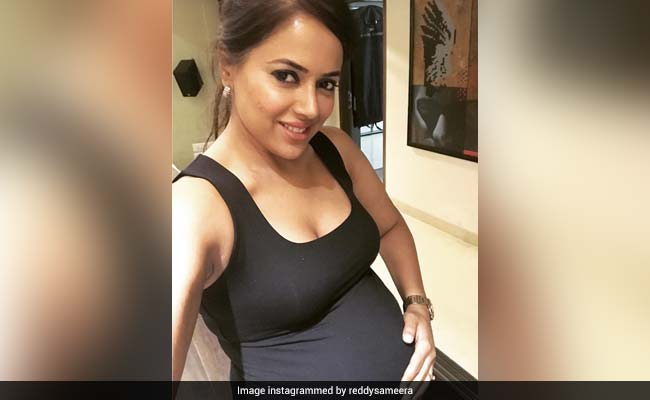 Actress Sameera Reddy, who is expecting her second child, recently opened up about the issue of women being targeted by trolls for post pregnancy weight at an event, reported news agency IANS. Talking about new moms being at the receiving end of brutal body-shaming and the struggle to shed the post-pregnancy weight, Sameera Reddy said: "There are sexy ones like Kareena Kapoor who's come out looking fully hot, and there are people like me who take time (to get back in shape)," reported IANS. Sameera Reddy and her businessman husband Akshai Varde welcomed son Hans in 2015 and are now expecting their second child.

Kareena Kapoor and Saif Ali Khan welcomed Taimur Ali Khan in December 2016 and within weeks, the actress was spotted making regular visits to gym sessions and pilates classes. Kareena rejoined the sets of Veere Di Wedding in almost no time and was even trolled as a section of the Internet decided that her going back to work means "abandoning" her duties as a mother. The 38-year-old actress was also trolled for "not dressing like a mother." Later in an interview, Kareena had told PTI: "The idea is that a woman should constantly live her life the way she wants. It should be (done) fearlessly and confidently. That has been my mantra of life."

At the trailer launch of Veere Di Wedding in April last year, Kareena Kapoor said while she wanted Rhea Kapoor to replace her in the film, Saif motivated Kareena to get back in shape and return to work, PTI had reported: "It was Rhea's conviction. She was like 'Let's just wait'. After that it was Saif who kind of pushed me and said 'I think you should hit the gym and get back to the studio'. He said, 'Take your son with you and set an example to other mothers'. I think it's been good till now. This journey has been beautiful."

"It's shameful," Sameera condemned trolls and revealed that she took considerable amount of time to get back in shape after her first pregnancy: "It took me time to (lose weight) with the first baby. Maybe it'll take me time with the second baby. But what's most important is to embrace yourself." She also had a direct message for trolls: "I have a superpower. I am giving birth to a baby."

Talking about embracing one's body, Sameera said she is more confident with her mom-to-be physique this time than the first: "I was like what people will expect, and how fast I will lose my weight. But now I feel different, cool, charming. I remember , I used to cover up a lot in my first baby but now I am like bring it on. I can also be hotter and pregnant. The women in our culture have become very accepting of pregnant woman and why not," IANS quoted her as saying.

Earlier this year, new mom actress Neha Dhupia took a stance against body-shaming by tearing apart an article that fat shamed her. "Fat shaming needs to stop for EVERYONE not just celebs," she wrote.

I don't owe anyone an explanation because fatshaming like this doesn't bother me one bit. But I do want to address this as a larger problem because fatshaming needs to stop for EVERYONE not just celebs. As a new mom i want to be fit, healthy and energetic for my daughter. So I work out everyday, sometimes twice a day because for me...'Fitness' is a priority and not 'fitting into' society's standards regarding looks. And I hope in the future people are kinder to each other while making such vapid and vile comments. To quote @pattonoswalt ... "Be Kind. It's chaos out there."