New Delhi: Ahead of Ganesh Chaturthi, on September 17, actor Prabhas is happy to hear that his pose from his Baahubali: The Beginning opus has inspired some creative minds for Ganesha idols.

Many lord Ganesha idol makers are said to have started creating idols similar to Prabhas' pose, where he carries a 'Shivling' on his shoulder. (Also Read: 'Couldn't Have Done Baahubali Without Prabhas,' Says Director SS Rajamouli) 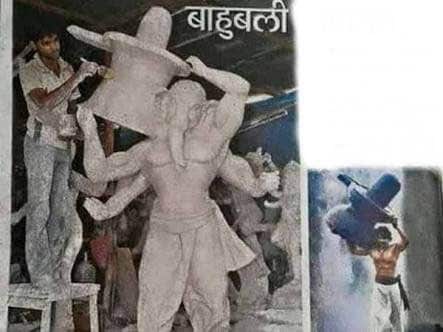 Image courtesy: IANS
Prabhas considers it a compliment. "After learning the news, Prabhas is very keen to visit one such idol during the festival and take blessings. He is extremely flattered with the way his character has connected with audiences across and the kind of impact it has had," his spokesperson said in a statement.

Directed by SS Rajamouli, Baahubali: The Beginning, which released on July 10, is the first of a two-part series.