Pooja Bhatt Digs Out A Throwback Pic Of Sunil Dutt, Sanjay And Mahesh Bhatt From Her Memory Bank 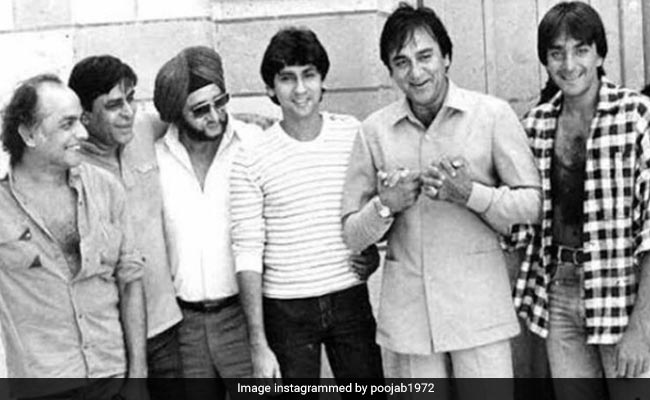 A day after Sunil Dutt's death anniversary on May 25, Pooja Bhatt remembered the legendary actor. On Tuesday, Pooja shared a throwback picture from the sets of the 1986 film Naam, which starred Sunil Dutt's son Sanjay Dutt in the lead role along with Kumar Gaurav. The crime-thriller was directed by Pooja's father Mahesh Bhatt and was a milestone in his career trajectory. The aforementioned photograph also features Kumar Gaurav along with Sunil Dutt, Sanjay Dutt and Mahesh Bhatt. Pooja Bhatt captioned the post: "In memory of Sunil Dutt saab, who fathered them all in every which way. #memorybank #onlocation #Naam #classicfilms #classicmen #solidgold."

Besides Sanjay Dutt and Kumar Gaurav, Naam, also starred Nutan, Poonam Dhillon, Amrita Singh and Paresh Rawal in pivotal roles. The film showcased the story of two brothers Ravi (Kumar Gaurav) and Vicky (Sanjay Dutt), who find themselves tangled in problems after Vicky finds a visa and a job in Dubai fraudulently and ends up working for a smuggler named Rana (Paresh Rawal).

On Monday, Sanjay Dutt remembered his father Sunil Dutt by posting a video and he wrote: "With you by my side, I knew that I don't need to worry about anything. Thank you for always having my back. Miss you today and everyday Dad."

With you by my side, I knew that I don't need to worry about anything. Thank you for always having my back. Miss you today and everyday Dad

On the work front, Pooja Bhatt is all set to return to big screen with the sequel of her 1991 film Sadak. In Sadak 2, Pooja co-stars with former colleague Sanjay Dutt, sister Alia Bhatt and actor Aditya Roy Kapur. Directed by Mahesh Bhatt, the film is slated to open in theatres this year. Pooja and Rahul Bhatt are Mahesh Bhatt's children with his first wife Kiran while Alia and Shaheen are the filmmaker's daughters with Soni Razdan.