Please Excuse Tiger Shroff's "War Cries". Guess The Kilos He Is Deadlifting In This Video 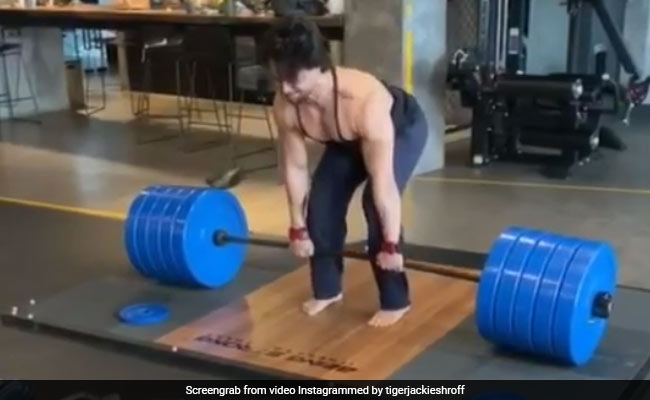 Tiger Shroff in a still from Instagram video (courtesy tigerjackieshroff)

Tiger Shroff, known for setting impossible fitness goals, is back with yet another glimpse of his work-out session and oh boy, it's not for the faint hearted. Tiger, who co-owns the fitness studio MMA Matrix with his sister Krishna, posted a brief video of him deadlifting in the gym. In the video, he can be heard letting out a cry, which he refers to in his caption: "Excuse the war cries... that felt heavy." For those who are wondering, what could be heavy enough for a fitness freak like Tiger Shroff, the answer is 220 kilos of weight. Yup, you read that right. Take a look at Tiger Shroff's video here:

No points for guessing that Tiger's rumoured girlfriend Disha Patani was one of the first ones to drop a comment - she posted the clapping hands emoji. Tiger's mom Ayesha Shroff thought that the video is "insane" while Eban Hyams, who is dating Tiger's sister Krishna, wrote: "Beast mode." Shout outs for Tiger also poured in from the likes of Sussanne Khan, Dino Morea and others.

Tiger Shroff's feed is filled with his work-out videos and photos of his shirtless self and chiselled abs, some of which often prompt comments from Tiger's "idol" Hrithik Roshan, who too is a bona-fide fitness enthusiast. This photo of Tiger Shroff even impressed Ranveer Singh, who wrote "10 is the new six."

Here are some work-out posts from Tiger Shroff's timeline:

Throwback to throwing around some weight...220 kgs. Bodyweight at the time - 75 kgs

Tiger Shroff's last film was the third instalment in the Baaghi series - in which his shirtless avatar impressed the audiences so much that the film scored over Rs 90 crore in a week at the box office. He will next be seen in Heropanti 2.