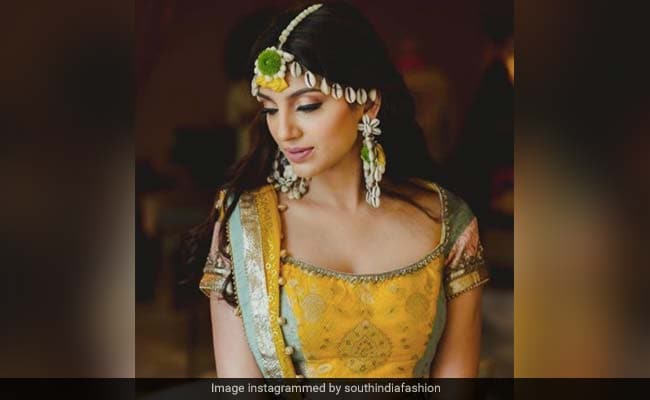 South star Rana Daggubati and his fiancee Miheeka Bajaj's wedding festivities have already begun and we can't keep calm. The duo will reportedly get married on this Saturday in Hyderabad. It has also been reported that their intimate wedding will be attended by no more than 30 people but more on that later. On Thursday, we chanced upon some stunning pictures from Miheeka Baja's haldi ceremony and they are every bit dreamy. Miheeka looks straight out of a fairy tale in the photos. The bride-to-be looks breathtakingly beautiful in a bright yellow and green lehenga and paired it with seashell jewellery.

Earlier, a Times Of India report stated that Rana Daggubati and Miheeka Bajaj, who got engaged on May 21, will have an intimate wedding at Hyderabad's Ramanaidu Studios on August 8 and only 30 people will be present at the wedding, considering the ongoing coronavirus crisis. Rana Daggubati's father Suresh Babu was quoted as saying by the publication: "There will not be more than 30 people present at the wedding. We want to limit the guest list to just family and we haven't invited even some of our closest friends, within and outside the film industry. The reality is that COVID-19 cases continue to rise and we don't want our celebrations to risk anybody's health, so I want to set the right example. The ceremony will be small but beautiful."

Rana Daggubati and Miheeka Bajaj officially got engaged on May 21 and pictures from the beautiful intimate ceremony were shared by both Rana and Miheeka and their family members on social media.

Thankyou for bringing us the best news of 2020 @ranadaggubati @miheeka ... here's to your happily ever after .. @tpt.toast

And a week before - on May 12 - the duo announced their engagement like this: