Nothing To See Here, Just A Pic From Rana Daggubati And Miheeka Bajaj's Wedding Prep

Rana Daggubati and Miheeka Bajaj are reportedly looking forward to an August wedding. 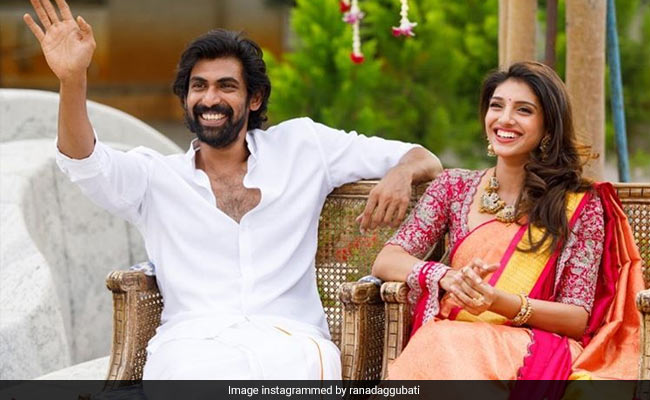 Rana Daggubati and Miheeka Bajaj, who got engaged in May this year, are reportedly looking forward to an August wedding and going by Miheeka's social media activity, it appears that 'tayyari zor shor pe hai.' Recently, Miheeka shared a picture of a pair of juttis she got as a gift from Fizzy Goblet from their bridal collection. Before this, Miheek Bajaj, who is an interior designer, sent the internet into a meltdown with pictures from what appeared to be a pre-wedding ceremony, for which she wore Jayanti Reddy ensemble. Miheeka Bajaj did not elaborate and only offered mini glimpses of the wedding preparations.

Of the aforementioned pictures from the pre-wedding function, Miheeka looked resplendent in an embroidered mint green lehenga with jadau jewellery by Krsala.

In May, Rana Daggubati announced his engagement and shared pictures from the ceremony. The engagement ceremony was held with only family members in attendance and the wedding will also be a small ceremony as per government guidelines for social gatherings due to the coronavirus pandemic, Rana Daggubati's father Suresh Babu reportedly told Deccan Chronicle. The report also added that the wedding ceremony is scheduled for August 8.

Rana Daggubati debuted on the silver screen with 2010 movie Leader and went on to star in films like Krishnam Vande Jagadgurum, Baby and the Baahubali series. Miheeka Bajaj is the owner of interior decor and event business Dew Drop Design Studio.