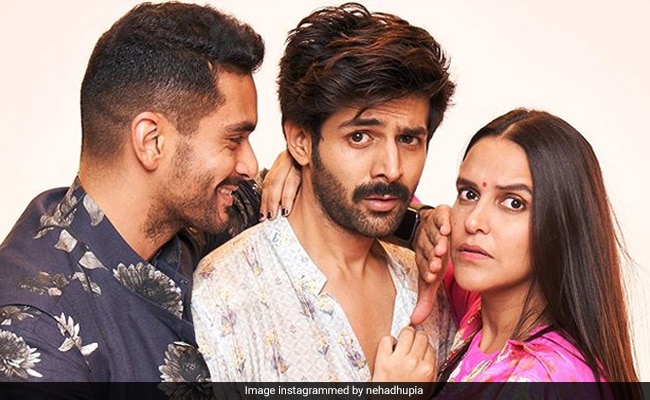 Actress Neha Dhupia shared a couple of adorable pictures of herself and her actor husband Angad Bedi on Thursday but it come with a 'Woh' twist. Any guess? Well, it is none other than Kartik Aaryan, who featured as Woh in the pictures. Kartik will next be seen as 'Pati' in comedy drama Pati Patni Aur Woh. Making a reference to his upcoming film, Neha Dhupia even pulled the actor's leg for becoming 'Woh' between her and her husband in her post. In the pictures, the trio can be seen dressed in traditional outfits and having a hearty laugh together. Sharing the photos, Neha Dhupia trolled Kartik Aaryan and wrote: "Chintu Tyagi (Kartik's character in the film) 'woh' kabse ban gaya." To this, the actor replied: "Hamesha se." LOL

And, here's what Kartik Aaryan commented:

In Pati Patni Aur Woh, Kartik Aaryan will be seen as Pati while Bhumi Pednekar and Ananya Panday will feature as Patni and Woh, respectively. The film is the Hindi remake of the 1978 movie of same name, which featured Sanjeev Kumar, Vidya Sinha and Ranjeeta Kaur in the lead roles. The original film also starred Rishi Kapoor, Neetu Singh and Parveen Babi in guest appearances.

Kartik Aaryan's promotional activities for Pati Patni Aur Woh is in full swing. From challenging his fans to take part in the Dheeme Dheeme Challenge to dancing with Deepika Padukone at the airport, Kartik Aaryan has taken the social media by storm. His film is now all set to open in theatres tomorrow.