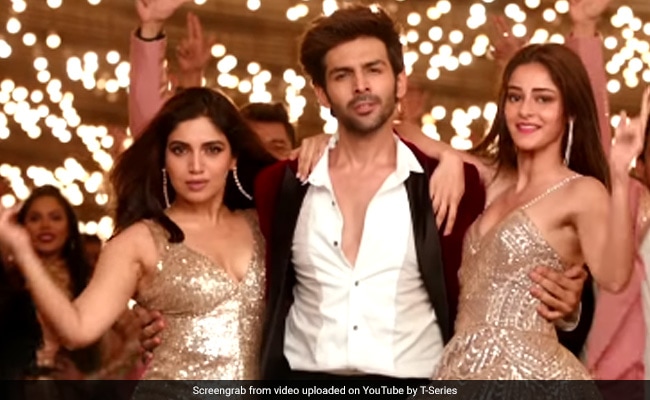 The makers of Pati Patni Aur Woh released the second song - Ankhiyon Se Goli Mare - from the film on Wednesday and we bet you can't stop yourself from dancing to this song. The song, which is a reprised version of Govinda and Raveena Tandon's super hit track from their 1998 film Dulhe Raja, features Kartik Aaryan, Bhumi Pednekar and Ananya Panday. Ankhiyon Se Goli Mare is all about Chintu Tyagi's (Kartik Aaryan) romance with wife Vedika (Bhumi Pednekar) and love interest Tapasya Sharma (Ananya Panday) at the same time. The song has been choreographed by Farah Khan. Ankhiyon Se Goli Mare has been sung Mika Singh, Tulsi Kumar and composed by Tanishk Bagchi.

How much did you like the song? Tell us in the comments section.

Earlier, talking about the song, Ananya Panday told Pinkvilla that she is "super excited" about it. "I'm super-duper excited about the song because Akhiyon Se Goli Mare is such an iconic song. I have danced on it so many times at so many parties and we have always recreated the steps that Raveena ma'am and Govind sir have done and now I will be doing my own steps which are a lot of fun, and I'm so excited to do that," she told the publication.

The first song from the film - Dheeme Dheeme - went crazy viral on social media in no time. Pati Patni Aur Woh is the remake of the 1978 film of same name, which featured Sanjeev Kumar, Vidya Sinha and Ranjeeta Kaur in the lead roles. The remake also features Aparshakti Khurrana and Rajesh Sharma.

Pati Patni Aur Woh is slated to release on December 6.