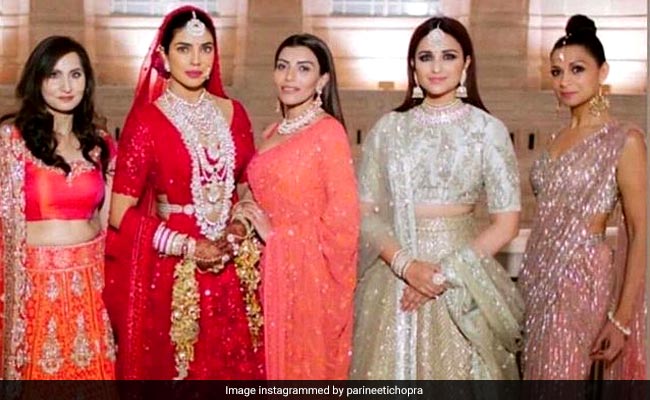 Parineeti Chopra took a trip down memory lane and landed at her cousin Priyanka Chopra's big fat wedding in Jodhpur two years ago. Priyanka Chopra and Nick Jonas had a fairy tale wedding - the groom and the bride were accompanied by a bunch of bridegrooms and bridesmaids, and Parineeti was one among them. Parineeti picked out a favourite photo of hers with Priyanka, who surely looked like royalty in Sabyasachi wedding couture. "Bridesmaids with the queen bee," Parineeti captioned the throwback memory, also featuring Priyanka Chopra's friends - filmmaker Mubina Rattonsey and Tamanna Dutta, and the actress' investment manager Anjula Acharia.

Priyanka Chopra and Nick Jonas celebrate two wedding anniversaries every year as they had two wedding ceremonies - one was a traditional Hindu wedding, followed by a Christian wedding. The couple celebrated two year so being Mr and Mrs with heart-warming Instagram posts recently, sharing unseen moments from their Jodhpur wedding. "Two years down... forever to go," wrote Priyanka while Nick added: "Two days, two weddings now two years. I was so honored to get to marry Priyanka Chopra in her home country, in a traditional Hindu wedding. I can't believe how lucky I am, and how quickly the time has gone by. Happy Hindu anniversary beautiful."

After Priyanka Chopra's wedding, Parineeti revealed that Nick Jonas had planned the best gifts for the bridesmaids. Parineeti said that when the bridesmaids asked Nick Jonas for the shagun in exchange of his wedding shoes during joota chhupai, he signalled to his groomsmen, who brought out an array of diamond rings, one each for every bridesmaid.