Parineeti Chopra shared lovely images of the happy couple and the family. 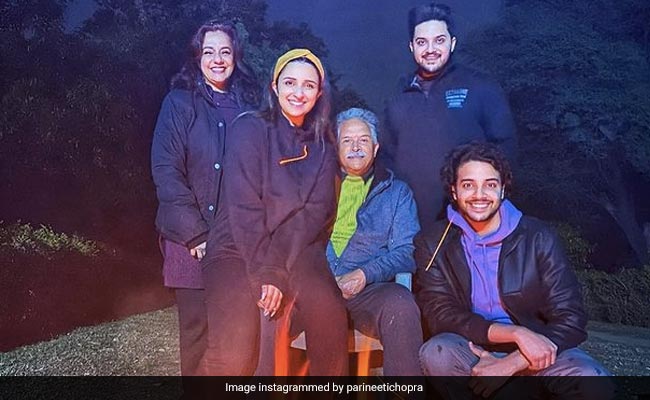 Parineeti Chopra is a complete family girl. From rooting for her mother's artistic talents to taking her dad and mom on special holiday getaways, the actress dotes on her parents. Giving us more proof of this, Parineeti Chopra has now shared a heartwarming note and a bunch of pictures on the occasion of her parents' 35th wedding anniversary. Sharing some lovely images of the happy couple and the family, Parineeti Chopra wrote about how the two were “an unlikely match” that resulted in a beautiful marriage.  The actress wrote, “Mom: NRI from Kenya. Dad: Small-town boy from Ambala. An unlikely match. 35 years later …” followed by heart emojis.

In the post, Parineeti Chopra continued, “Happy Anniversary mom and dad. Love, loyalty, understanding, friendship - you've created your own definition. And you raised the 3 of us like you; ambitious, kind and honest.”

And what is the one thing Parineeti Chopra is glad she inherited from her parents? Humour. She wrote, “But mainly - thanks for passing on your sense of humour. Can you imagine having 2 hilarious parents, but the children are not? Phew. If you hadn't passed on your funny gene to us, we would have a problem. So good job saving the family. Congrats.” The actress signed the note saying, “Sincerely, Your  many-other-adjectives-but-mainly-funny-kids.”

Reacting to the image, Priyanka Chopra, Parineeti Chopra's cousin wrote, “Miss u all! So nice to see these pictures.”

Recently, Parineeti Chopra took her family on a vacation to the Maldives and shared a bunch of pictures from the trip. Sharing one such image, Parineeti Chopra wrote, “Fam jam, took out our cam! Missing you stoopidd boiii, Sahaj Chopra.”

Parineeti Chopra has a way with words, especially when it comes to writing notes for her family. Recently, on the occasion of her brother, Sahaj Chopra's birthday, Parineeti Chopra wrote, “Even when we are 80 years old, I think you and I will be like this - like two happy grannies, bathing in the sun and chatting away, talking about our dreams and the plans we have for our lives .. this is us .. you are my little baby, but also my elder mentor .. since the day you were born, I held you in my arms till you became too heavy to carry! But the moment I put you down, you took over .. you've held my hand and shown me the way when no one else did! you've been my big man, since you were a little man! Happpy bdayyyy stoooopid boiiiiiiii ... luff yewwww ok??”

Parineeti Chopra made her debut in 2011 with Ladies vs Ricky Bahl. This year, she has had three releases including The Girl On The Train, Sandeep Aur Pinky Faraar and Saina. Her upcoming projects include Uunchai and Animal.