"My sweet can't move, I can lie like this forever," wrote Karanvir Bohra 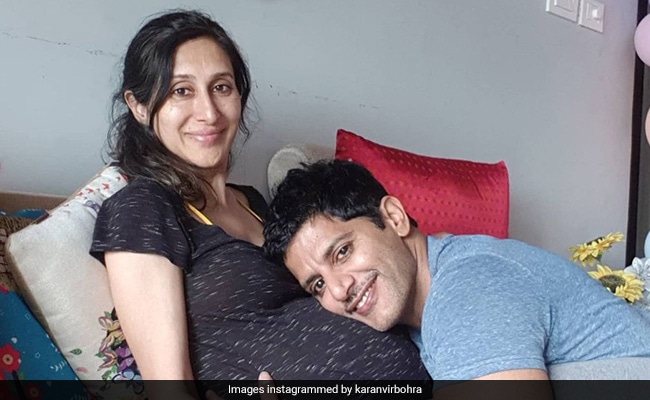 Teejay Sidhu and Karanvir Bohra, who announced their second pregnancy on the actor's birthday in August, actively share posts from different facets of their lives on social media. On Thursday, Karanvir Bohra added another picture to his collection and it is super cute. The picture features mom-to-be Teejay, while Karanvir Bohra can be seen happily posing as he rests his head on Teejay's baby bump. The actor captioned the post: "Aww.....My sweet can't move, I can lie like this forever." He added the hashtags #3rdbaby, #ontheway and #excitedmainedda. In the comments section, Teejay wrote: "Help."

Teejay and Karanvir are parents to twin daughters Raya Bella and Vienna, whom they welcomed in October 2016. They recently celebrated their birthday. An excerpt from Teejay's birthday post for her daughters read, "Happiest birthday to my dearest daughters, who I love even more for being such sweet, simple human beings."

In these times, you can't have big parties. Still, it took two days to recover from the smallest birthday party ever! Doesn't matter if you have five guests or fifty, the exhaustion is still the same! I also learned that children don't care if only a few friends come over - as long as they laugh and play and have fun, they are happy. (Kids are so easy to please!) :) Happiest #birthday to my dearest #daughters who I love even more for being such sweet, simple human beings.. * @fairylights.events @ankzz81 Thank you for executing our #fairyland theme so beautifully, for transforming our living room into a magical space! @dessert_desire02 Thank you for the beautiful #twin #unicorn cakes and the pinata! #bella #vienna #twinsisters #birthdaygirls #loveandlight #fouryearsold #birthdayblessings

The couple, who were on their babymoon in Uttarakhand earlier this month, shared adorable pictures and posts on their respective Instagram handles.

I'm going to be in so much trouble! I didn't take her on a #babymoon during the first pregnancy.. and this is my idea of a #maternity #shoot this time around.... But sweety @bombaysunshine, I did take you to #dehradun for a babymoon!

Karanvir Bohra became a household name after starring in shows like Just Mohabbat, Kyunki Saas Bhi Kabhi Bahu Thi and Shararat, among others. He was last seen in Naagin 3. He also participated in the TV reality show Bigg Boss 12 and the dance reality show Nach Baliye 4, where his plus one was his wife Teejay. Karanvir Bohra has also been a part of films such as Kismat Konnection and Hume Tumse Pyaar Kitna.