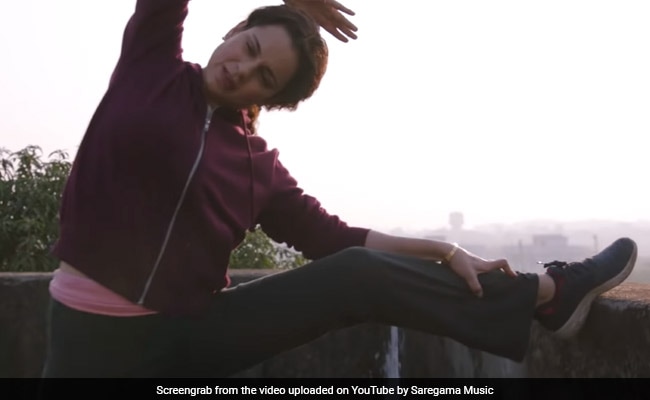 Kangana Ranaut in a still from the song. (courtesy YouTube)

The makers of Panga released the first song from the film. The power-packed title track dropped on Tuesday afternoon and it has already booked a spot in the trends list. The song showcases the journey of Jaya (played by Kangana Ranaut), a mother who dreams of becoming a kabaddi champion once again. We also get glimpses of Richa Chadha and Jassie Gil, who constantly support Jaya during her pursuit of becoming a kabaddi champion. The title track has been sung by Harshdeep Kaur, Divya Kumar and Siddharth Mahadevan. The hard-hitting lyrics are by veteran lyricist Javed Akhtar. The song has been composed by Shankar-Ehsaan-Loy. Sharing the song on social media, the film's director Ashwini Iyer Tiwari wrote: "Apne sapno ke liye zor se bolo le panga."

The trailer of Panga released last month and it got a great response from not only Kangana's fans, it also got a big shout out from Bollywood actors like Deepika Padukone, Abhishek Bachchan, Sonam Kapoor, Vikrant Massey among others.

Panga has been directed by Ashwiny Iyer Tiwari. The sports drama showcases the story of a woman named Jaya, who was once a kabaddi champion but was forgotten over the time. However, she decided to make a comeback in Kabaddi with help from her husband Prashant (played by Jassie Gill). Other than Kangana, the film also stars Richa Chadha and veteran actress Neena Gupta in pivotal roles. The film is slated to release on January 24, 2020.