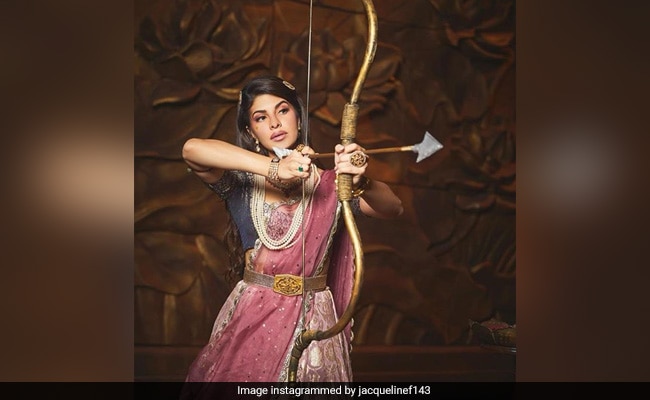 Jacqueline Fernandez gave us another glimpse of her upcoming music video with Bigg Boss 13 first runner-up Asim Riaz and we can't wait for the video to be released. The actress, on Wednesday, shared a few pictures on her Instagram profile where she can be seen dressed in a traditional outfit while posing with a bow and arrow. In the picture, the Kick actress looked pretty in a pink and grey lehenga, accessorised with a statement necklace. "Princess diaries," she captioned her post. Have a look at the aforementioned post here :

Within a few minutes of posting, the pictures were flooded with comments like "So beautiful" and "queen" from her Instafam.

The 34-year-old actress on Tuesday, gave us a glimpse of the BTS of her upcoming music video with Asim Riaz. She posted a picture where she can be seen posing with Asim. Sharing the picture, she wrote, "Please smile more, it suits you. New song coming out soon."

Asim Riaz also shared a few BTS pictures on his Instagram profile on Tuesday, and wrote, "On set Day 2, super excited for this song dropping out soon with Jacqueline Fernandez." Reacting to Asim's post, Jacqueline dropped the comment, "Only up from here."

On set Day2, super excited for this song dropping out soon with @jacquelinef143 @tseries.official @toabhentertainment

The music video is being directed by Radhika Rao and Vinay Sapru and is being produced by Bhushan Kumar. The track has been composed by Tanishk Bagchi and sung by Neha Kakkar.

On the professional front, Jacqueline Fernandez was last seen in Netflix's Drive, which also starred Sushant Singh Rajput. The actress has also been roped in for Netflix's crime thriller Mrs Serial Killer which will be produced by Farah Khan.