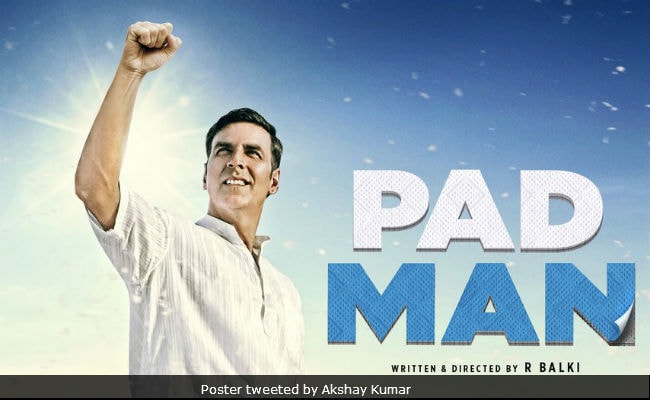 New Delhi: Akshay Kumar shared a new poster from his upcoming film Padman and we love it. In the new poster shared by Akshay, the 50-year-old actor is posing like a 'super hero,' which is also the tagline of his film, directed by R Balki. Padman is a biopic on entrepreneur Arunachalam Muruganantham (played by Akshay), who became a popular figure for inventing low-cost sanitary making machines and hence, the name of the movie. In the poster, Akshay can be seen standing on a pile of cotton, which looks like a set-up for making sanitary pads. Sharing the poster on Twitter today, Akshay reminded his fans about the release date of the film, which is January 26, 2018. "Super hero hai yeh pagla, aa raha hai 26th January, 2018 ko: #Padman," Akshay captioned the poster.

Earlier, Akshay had revealed the first looks of his co-stars Sonam Kapoor and Radhika Apte from the movie. Radhika Apte has been cast as Padman's wife while Sonam's character appears to have helped him in his venture. Check out how Sonam and Radhika's looks from Padman:

The REASON he became #PADMAN...find out on 26th January, 2018. @radhika_apte@PadManTheFilm@sonamakapoor@mrsfunnybones@SonyPicsIndia@kriarj#RBalkipic.twitter.com/a1TB69KE6m

Earlier in August, the first look of Akshay Kumar as Padman pedalled his way to social media like this. The film was scheduled to release in April then but has now been rescheduled to hit screens on January 26. Padman will be co-produced by Twinkle Khanna's Mrs Funnybones Movies and KriArj Entertainment while Sony Pictures has also come on board for worldwide distribution of the movie.

R Balki, who last directed 2015's Ki and Ka, said that this project is going to be as interesting as Sholay. In an interview to news agency IANS, the director said, "His (Muruganantham's) life itself is equal to Sholay. It is as entertaining as the biggest masala entertainers... And when you have a life that is so entertaining, why do I need to add entertainment."

Promoted
Listen to the latest songs, only on JioSaavn.com
Sonam Kapoor is currently prepping for Veere Di Wedding, co-starring Kareena Kapoor Khan and Swara Bhaskar while Akshay will also feature in 2.0, co-starring Rajinikanth.