Akshay Kumar shared a message for all the children in the world: "You couldn't imagine how much you make this world a better place to live in" 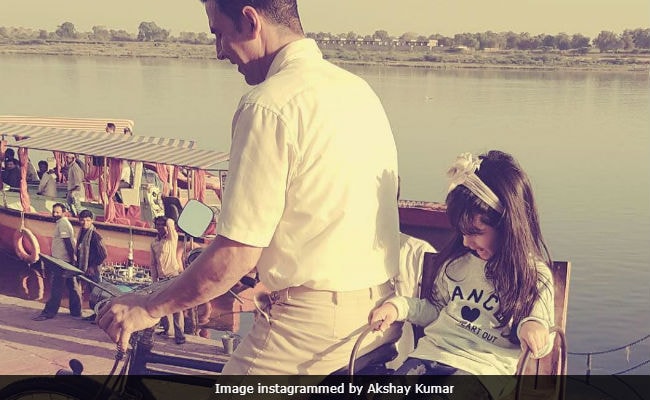 Akshay Kumar and Nitara on the sets of Padman. (Image courtesy: Akshay)

New Delhi: Actor Akshay Kumar's Children's Day post featuring his daughter Nitara is arguably the cutest today. Akshay shared a picture from the sets of his upcoming film Padman, in which Nitara rode a bicycle with Akshay. In the post, Akshay said: "This beautiful lil human being is my biggest life line." He recalled the time when five-year-old Nitara wanted to "ride on Padman's bike every day" and compared it to the present day when his little girl has "learnt to ride her own (bicycle)." Akshay Kumar added: "Happy Children's Day to every child across the globe, you couldn't imagine how much you make this world a better place to live in."

This Beautiful Lil Human Being is my Biggest Life Line...she wanted to ride on PadMan's bike everyday and now she's learnt to ride her own #HappyChildrensDay to every child across the globe, you couldn't imagine how much you make this World a Better place to live in

Akshay Kumar is married to former actress Twinkle Khanna, who is now the author of two bestsellers - Mrs FunnyBones (a compilation of her humour columns) and The Legend of Lakshmi Prasad (a collection of short stories). Akshay's Padman is based on Twinkle's short story The Sanitary Man of Sacred Land, which in turn is inspired from the real life story of Arunachalam Muruganantham, the inventor of low-cost sanitary napkins making machine.

Promoted
Listen to the latest songs, only on JioSaavn.com
Akshay's film is directed by R Balki and produced be Twinkle Khanna through Mrs FunnyBones Movies. Padman also stars Sonam Kapoor and Radhika Apte. The film is expected to release in the Republic day weekend in 2018 but the release date may get rescheduled if the makers of Rajinikanth's 2.0 also announce the release on the same day. In 2.0, Akshay plays principal antagonist.