In "Padmaavat" new song Khalibali, Ranveer Singh as Alauddin Khilji dances with his army to celebrate his victory 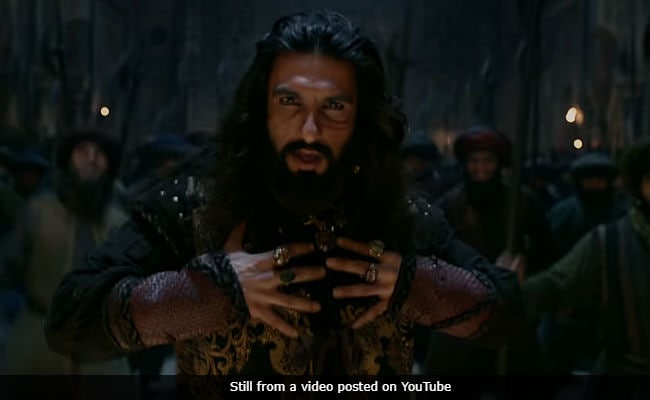 New Delhi: Ranveer Singh's victory anthem Khalibali from new film "Padmaavat" is out on the Internet. For those who have not seen the film yet, Khalibali is definitely a treat and for those who have seen director Sanjay Leela Bhansali's magnum opus, well, it's a treat for them too. Some parts of Khalibali may also reminds viewers of Ranveer's Malhari from Bajirao Mastani - the actor's previous film with director Bhansali. Ranveer plays uncouth Alauddin Khilji in "Padmaavat", who is obsessed with Chittor's Rani Padmavati, played by Deepika Padukone. In the film, the song is played when Alauddin Khilji has captured Padmavati's husband Maharawal Ratan Singh (played by Shahid Kapoor) and was waiting for her arrival in Delhi.

Khalibali is the third song of "Padmaavat," which has been shared by the filmmakers on social media. The film's promotion by the cast and the promotional content was restricted before the film's release, courtesy of Karni Sena's agitation against team "Padmaavat." But amid angry protests, "Padmaavat" hit the screens on January 25 and has managed to collect over Rs 110 crore in four days.

Promoted
Listen to the latest songs, only on JioSaavn.com
Ranveer Singh's portrayal of Alauddin Khilji has been praised by several celebrities and critics. The actor told news agency IANS that was told not to take up the anti-hero's role. "I took a big risk with this character and it's wonderful to see my gamble pay off. This kind of validation gives one the confidence to take bigger and bigger risks, challenge stereotypes and continue to push the envelope in the realm of mainstream Hindi cinema. I feel very happy and very fulfilled today," Ranveer said.

"Padmaavat" is based on Malik Muhammad Jayasi's ballad Padmavat, which narrates the story of Rani Padmini of Chittor, who performed jauhar after Khilji invaded the fort of Chittor.