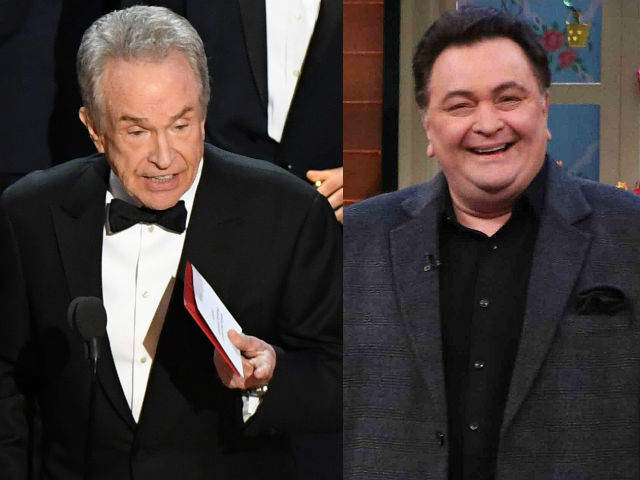 New Delhi: Poor Warren Beatty is being ridiculed on Twitter after La La Land was mistakenly announced as the winner of the Best Film Oscar at the 89th Academy Awards. The producers of La La Land were midway through the thank you speech when the 79-year-old actor returned to stage to drop a bombshell - he had been given the wrong envelope and it was Moonlight that had won Best Film, not La La Land. Umm, oops? La La Land had won Best Director, Best Actress and four other Oscars - but not Best Film. It was exactly the sort of moment that social media lives for.

The Oscars are broadcast in India at 7 am and Bollywood was clearly awake and watching. Rishi Kapoor, Karan Johar and Shabana Azmi were the first to comment on Twitter.

OSCARS. Shit happens at Oscars too!

That was the most ridiculous and hysterical goof up in the history of the academy awards!!!!! #oscarbooboo

First you bore us with a bland and boring ceremony...then you mess up the most important modality!!! #oSCAR

What?!! I just cant believe what happened at the Oscars !!!

#Oscars saving the best moment for last!At least this doesn't happen in our award shows.. we just give to whoever is still there in audience

Did this really happen?!! #Oscars#lalaland#moonlight

OMG!!!!! It happened in OSCARS announce a wrong winner for the #thebestpicture#Moonlight vs #lalaland@TheAcademy#Oscars2017

Promoted
Listen to the latest songs, only on JioSaavn.com
La La Land missed out the Best Film trophy but it did take home six prizes including Best Actress for Emma Stone, who competed against the likes of Meryl Streep and Natalie Portman. The film was nominated in 14 categories, the highest so far with Titanic and All About Eve. Casey Affleck won the Oscar for Best Actor for his performance in Manchester By The Sea. Viola Davis (Fences) and Mahershala Ali (Moonlight) were tipped for the Best Supporting Actor awards and did win. Moonlight won a total of three awards, the second highest number at the 89th Academy Awards. The film's third win was for Best Adapted Screenplay.