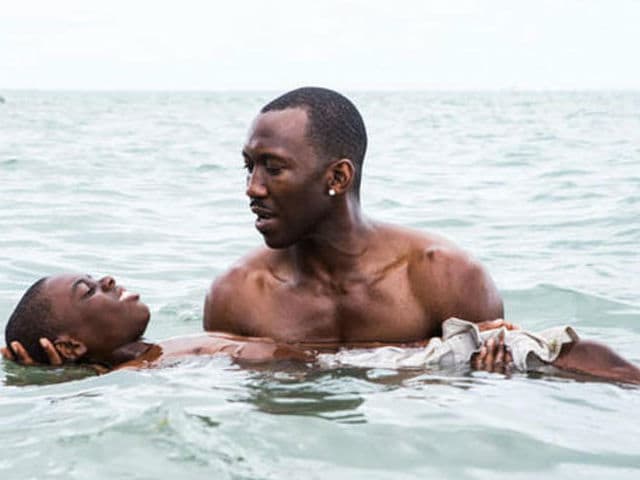 Washington: Just when the 89th Academy Awards looked like it couldn't get more ho-hum, a bizarre turn of events transpired in the ceremony's final moments that injected a bizarre jolt of adrenaline into the proceedings, when the best picture winner was announced twice: first La La Land, then the real victor, Moonlight. The mix-up ended an otherwise cheerful, notably uncontroversial night on a somewhat chaotic note, as a little indie-that-could came from behind to block the presumed front-runner in perhaps the most unintentionally exciting Oscars finale in recent history. The upset took on symbolic meaning as well, fairly or unfairly. Over the course of the awards season, the competition between La La Land, a candy-colored musical about two young strivers trying to make it in show business in modern-day Los Angeles, and Moonlight, about a young gay African American man coming of age in a rough Miami neighborhood, became something of a proxy for the politics that have infused the Academy of Motion Picture Arts and Sciences in recent years.

Would the Academy - which had come under criticism for excluding films by and about people of color - give its highest honor to a film that many observers criticized for "whitesplaining" jazz and marginalizing its few black characters? Or would Moonlight win the day in a year when a record 18 people of color were nominated for awards, and when Fences and Hidden Figures, both about African American protagonists, were also nominated for best picture?

The outcome turned out to be Solomonic: Moonlight took best picture, while La La Land writer-director Damien Chazelle won for best directing. Although La La Land was nominated for a record-tying 14 awards, it didn't run the table, taking home a respectable six Oscars, including the best actress award for Emma Stone. For its part, Moonlight won for best adapted screenplay and for best supporting actor, for Mahershala Ali. Several other best-picture nominees managed to win at least one or two Oscars, including Fences, Manchester by the Sea, Arrival and Hacksaw Ridge.

As for politics outside the Dolby Theatre, they were largely absent from this year's proceedings, despite the assumption that they would be front and center, as they have been since the election of Donald Trump. Although viewers might have been braced for fiery speeches after Meryl Streep's impassioned remarks about Trump at the Golden Globes in January, the tone was moderate, mostly focusing on the work itself; winners chose to make subtle pleas for such unassailable social goods as public education and the arts.

The most politically poignant moments were conveyed in absences. Iranian filmmaker Asghar Farhadi, who won for best foreign language film for The Salesman, chose not to attend the Oscars in protest of Trump's recent immigration ban; he sent an impassioned statement for tolerance and empathy instead. When the documentary short "The White Helmets," about Syrian first responders, won, its cinematographer, Khaled Katib, wasn't there, because he was prevented from entering the United States due to visa issues.

Despite the pall that these shadows cast, what emerged from this year's Oscars was an image of an industry that, despite a troubled history of racism and liberal hypocrisy, has made some progress in inclusion, an impression helped by Viola Davis finally receiving an award, for her supporting performance in Fences, as well as Ezra Edelman, for his sprawling documentary O.J.: Made in America. Rather than rail against an administration that many attendees clearly abhor (blue ACLU ribbons were visible throughout the audience), the mood was one of determination rather than self-congratulation.

For all its weirdness, the final win for Moonlight sent a particularly encouraging message: that, rather than self-righteous speeches or empty gestures, Hollywood is bracing itself to respond as a creative community to the current political realities, not with escapism or reflexive petulance, but in ways that are expansive and forward-looking. We'll know whether they succeed at the Oscars two or three years down the road.