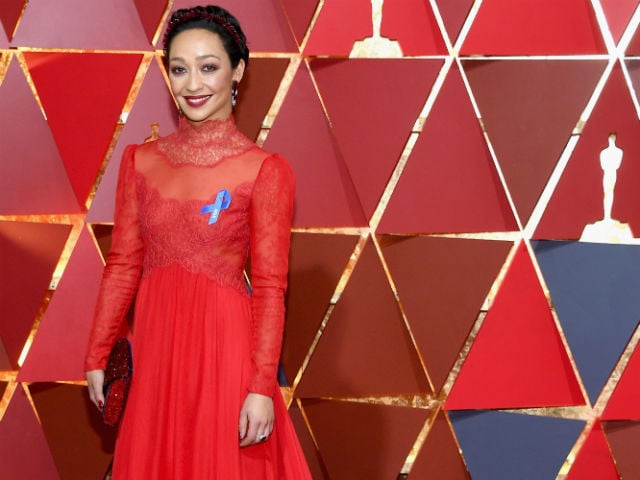 Washington: Of course there was politics on the red carpet at the 89th Academy Awards. It came in the form of blue ribbons worn in support of the American Civil Liberties Union. Actress Ruth Negga had one pinned to the bodice of her flowing red Valentino gown. Lin-Manuel Miranda wore one on the lapel of his black tuxedo - a suit he said he'd gotten from San Marko Formals & Fine Men's Wear in Yonkers, New York, which was the same place he'd gotten his prom tux almost 20 years ago. The model Karlie Kloss had her blue ribbon pinned to the hip of her white Stella McCartney gown with its attached half-cape. 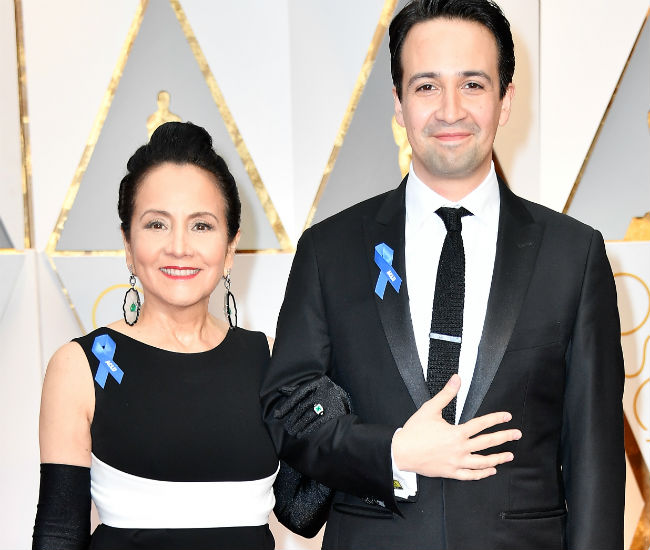 The gesture was simple and spoke for itself. There was no need, and perhaps no desire, to launch into a long, high-volume explanation. Hollywood loves its symbolic ribbons. For AIDS awareness, for gay rights, for human rights. And now, here was another, a nod to the organization that has challenged some of President Donald Trump's actions.

The more powerful social, cultural and political statement on the carpet, however, was simply in the array of people who walked it. It was a diverse mix of nominees and presenters - black, brown and white; older and younger. Folks born here in the United States. And those for whom the American Dream was a distant fantasy that only recently became real.

The red carpet felt more inclusive. It felt broader and more welcoming here at least for now, and more reflective of the world in which Hollywood films exist.

One of the first to arrive was Ruth Negga, nominated for her role in Loving. The Ethiopian-Irish actress cut a striking figure in a Valentino gown that was demure and graceful. But its bold red color - as well as her posture - also made it strong and powerful. Taraji Henson, one of the stars of Hidden Figures, about the African-American women who were instrumental in the success of the country's space program, was dressed by Alberta Ferretti. The dress, with its off-the-shoulder, portrait neckline was simple but with a dramatic slit. She wore an armoured truck's worth of diamonds around her neck, but they did not overwhelm her. 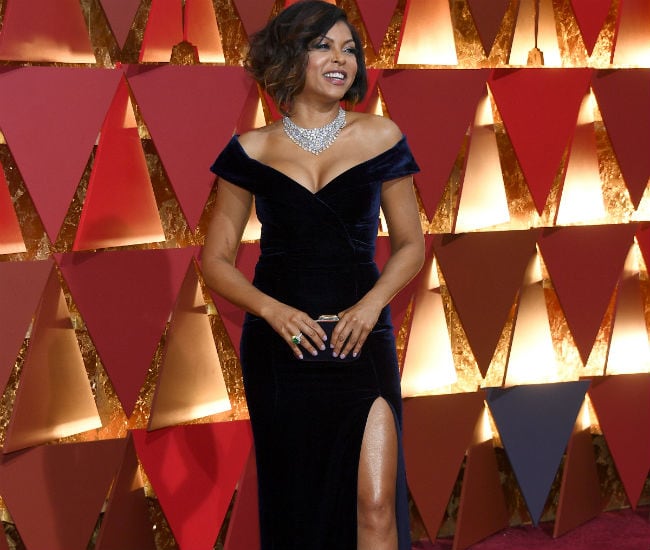 Taraji's co-stars made head-turning entrances, too. Supporting actress nominee Octavia Spencer wore an ethereal lilac gown by Marchesa. The bodice wrapped around her torso and the skirt was adorned with feathers. Often, plus-size actresses - or those who are not a teeny-tiny sample size - find their choices limited. Only a handful of designers are well-known for their work with women who exist in the realm of double-digit sizes. Marchesa created a beautiful gown for Spencer and she wore it with elegance. Janelle Monae stayed true to her eclectic, eccentric style in an elaborate gown by Elie Saab that looked like something out of the royal court of Marie Antoinette.

Supporting actress nominee Naomie Harris, who co-starred in Moonlight, looked elegant and sleek in a white, strapless gown from Calvin Klein. The Oscars mark the first major red-carpet dressing opportunity for the brand's new designer Raf Simons. He also wardrobed Moonlight cast members Trevante Rhodes, Ashton Sanders and Alex Hibbert. The red carpet coup follows his runway debut, which was not just a celebration of American style traditions but also the diversity in the American story. 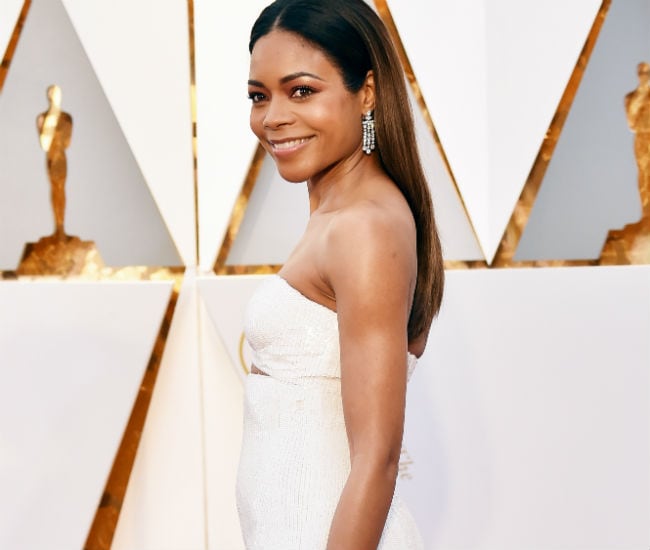 "I was honoured to be able to work with the cast of Moonlight and to celebrate the incredible talent of each of these actors and the amazing body of work that the film represents," Raf said in a statement.

Isabelle Huppert, nominated for leading role in Elle and who is well into her 60s, struck a note of grown-up glamour in a long-sleeved, glittering gown from Armani Prive.

Meryl Streep, nominated for the 20th time, did NOT wear Chanel. She wore a blue, satin gown with long sleeves and an off-the-shoulder collar over trousers, all from Elie Saab haute couture. Meryl's Oscar wardrobe became a fashion contretemps when Chanel designer Karl Lagerfeld erroneously stated that the actress had decided against wearing Chanel when another brand offered to pay her for the pleasure of dressing her. Not true, Meryl said in a statement. Lagerfeld later said that he was mistaken. 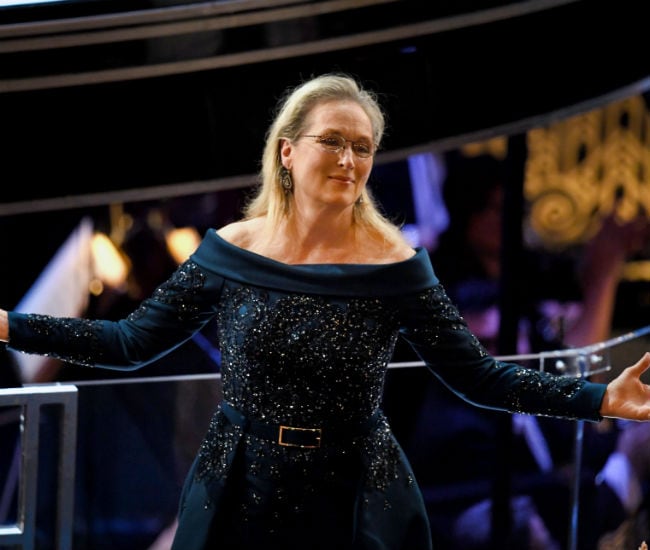 Meryl Streep interacts with the audience during the 89th Academy Awards (Courtesy: AFP)

The men mostly looked dapper and elegant in classic tuxedos and white dinner jackets. John Legend wore a classic Gucci tuxedo. Riz Ahmed wore Zegna. Dev Patel was in a white Burberry tuxedo jacket. And Justin Timberlake relied on his regular standby: Tom Ford. As he so often does, actor David Oyelowo was dressed by Dolce & Gabbana, and after having turned up in suits ranging in from purple to green, it's fair to say that Oyelowo has quite specific taste. Good for him for finding a design house that can satisfy it. 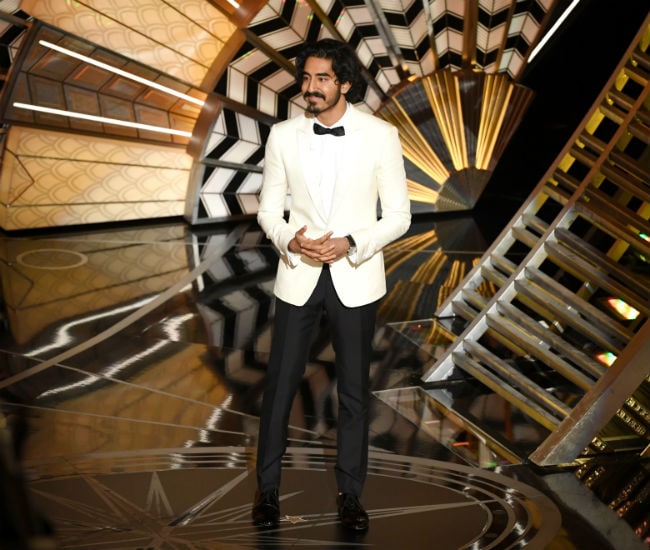 In their red-carpet banter, the celebrities seemed less inclined to hide behind rote comments or the facade of perfection. Or perhaps, it was just the folks who were welcomed into the spotlight Sunday evening. Chrissy Teigen admitted that her Zuhair Murad gown was really, really tight. Miranda, who arrived with his mother, acknowledged the Yonkers clothier where he'd gotten his tuxedo for the evening, not some fancy designer. And Henson left red carpet guru Ryan Seacrest languishing with dead air as she spent no small amount of time congratulating Pharrell Williams for his producing credit on Hidden Figures. Williams, by the way, was draped in Chanel - both his clothes and his assorted jewelry.

But more than the clothes or the jewelry, it was the people wearing them who made this red carpet memorable.