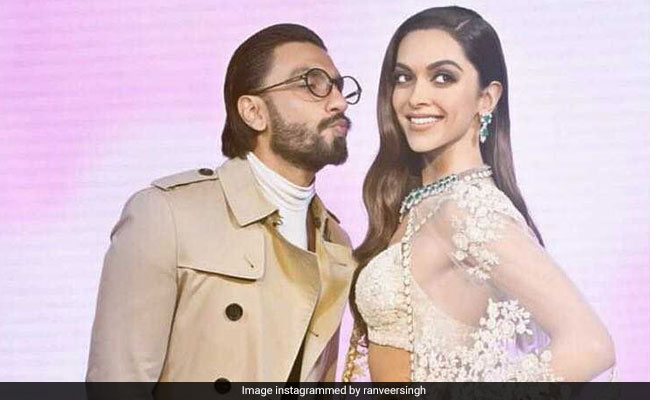 If you thought Anisha Padukone's post for her sister Deepika Padukone's wax statue at Madam Tussauds London was interesting, wait till you see Ranveer Singh's post. Ranveer, who accompanied Deepika to London, shared several pictures from the museum on his Instagram profile on Friday. In one of the pictures, Ranveer can be seen admiring Deepika's wax statue, while in the one other he can be seen posing along with Deepika and her family members (but more about that later). However, it wouldn't be wrong to say that the major highlight of Ranveer's post is the caption. In his post, a proud Ranveer, referred to Deepika's wax statue as "DP 2.0" and wrote: "Original toh mere paas hai." The Simmba actor accompanied the post with the hashtag "#twomuchtohandle."

Deepika Padukone's wax statue was unveiled at Madam Tussaud's London on Thursday. Deepika was well-represent by her family members. Besides Ranveer, her parents Prakash and Ujjala Padukone and Ranveer's parents Jagjit Singh and Anju Bhavnani were also present for her big day. However, Deepika's golfer sister Anisha Padukone, who couldn't attend the unveiling of the statue, shared an adorable post on her Instagram profile. Anisha shared a picture of Deepika along with her wax statue and captioned it: "As if one of her was not enough. Double trouble."

Pictures of Deepika's wax statue went insanely viral on social media. That's' not it, videos from the unveiling session were curated by several fan clubs. In one of the videos, an excited Ranveer could be seen admiring the wax statue. "Can I take it home?" said Ranveer, to which Deepika replied: "Now when you're here shooting for '83 and miss me, come here."

A post shared by bollywood bubble videos (@bollywoodbubblevideos) on Mar 14, 2019 at 3:01am PDT

On the work front, Deepika Padukone is currently gearing up for Meghna Gulzar's Chapaak, co-starring Vikrant Massey. The film is based on the life of acid attack survivor Laxmi Agarwal. Ranveer Singh's next film is Kabir Khan's '83, which is based on India's iconic win at the 1983 Cricket World Cup. He will be seen playing the role of Kapil Dev in the film.