Saba Azad shared a picture of her, clicked by Hrithik Roshan 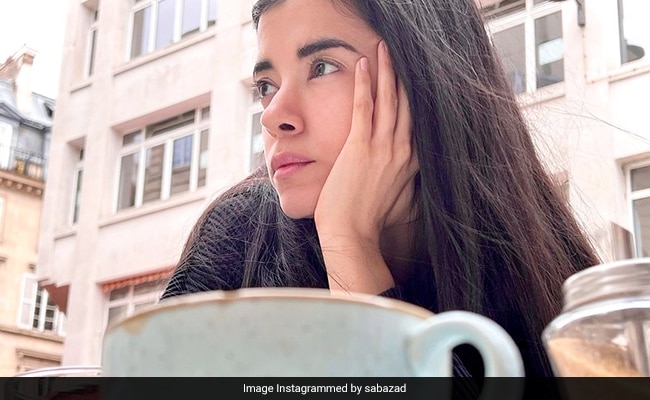 Actress Saba Azad shared a picture on Instagram on Friday and it is quite special. Why? Because boyfriend Hrithik Roshan turned photographer for her. He clicked a super cute picture of Saba in a pensive mood, staring at the distance with a cup of coffee in the foreground. In the caption, Saba tagged Hrithik, giving him credit for clicking the image, and revealed: "Not a selfie, not my coffee." It also happens that the couple is in Paris for a romantic getaway. A while back, Bollywood couple Arjun Kapoor and Malaika Arora, were also in the city of love for Arjun's birthday celebration.

Hrithik's cousin Pashmina Roshan, who is debuting with Ishq Vishq Rebound in the Hindi film industry, commented on Saba's picture and wrote, "You're so beautiful."

Hrithik Roshan and Saba Azad have been in a relationship for a while now and often slid into each other's comments section whenever they have to share their thoughts about a post. Earlier, Hrithik, who was in the US for shooting his upcoming film Fighter, shared a video with his teammates. The actor showed his "foodie" side and was glad that he has a team who loves food as much as he does. Saba's hilarious comment on the post was quite relatable. Reacting to Hrithik's expression in the clip, she wrote, "Hahahahahaha there's that "ok can we eat already" face." Take a look at the post below:

Hrithik, who was previously married to interior designer Sussanne Khan, introduced Saba at filmmaker Karan Johar's lavish birthday party this year. The couple were filmed walking the red-carpet and officiating their relationship on social media.

Hrithik will be seen in Fighter with Deepika Padukone. Saba, who is also a singer and musician based in Mumbai, is associated with the electro-funk duo Madboy/Mink. She has featured in films like Mujhse Fraaandship Karoge, and in the series Feels Like Ishq and Rocket Boys.