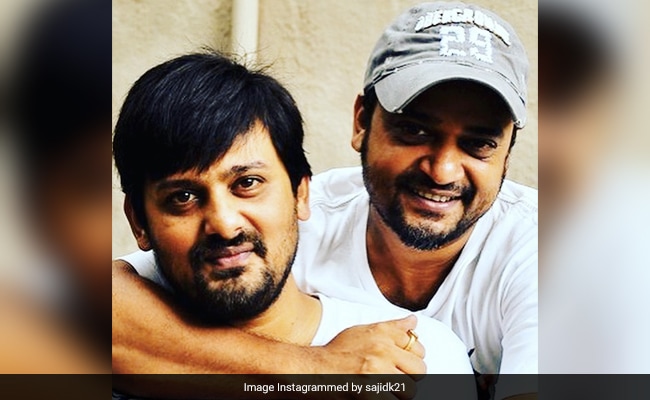 A file photo of Wajid and Sajid Khan. (courtesy sajidk21)

On Wajid Khan's first death anniversary, his brother Sajid Khan shared a happy memory of the late music composer in the form of a throwback video. The video happens to be from the brother-duo's US trip. Wajid can be seen interacting with his fans in the video as he smiles for the camera. Sharing the video on his Instagram profile on Tuesday, Sajid wrote in his caption: "Tum kya gaye tumhare jaatehi jeene ka mazaa bhi chala gaya. Miss you mere bhai Wajid. Love you always." Wajid Khan died at the age of 42 last year due to complications from kidney infection.

Salman Khan's 1998 film Pyaar Kiya Toh Darna Kya marked the debut of Sajid and Wajid Khan in the Indian music industry. The duo went on to compose music for many of Salman Khan's films, which included the Dabangg series, Partner and Wanted to name a few. Sajid-Wajid also featured as judged in popular singling reality shows such as Sa Re Ga Ma Pa 2012 and Sa Re Ga Ma Pa Singing Superstar. The duo also composed the theme songs for two seasons of the Salman Khan-hosted reality TV show Bigg Boss.

Wajid Khan, as a playback singer, had sung tracks such as Mera He Jalwa, Fevicol Se, Chinta Ta Chita Chita and Mashallah - all of which were hits. The late composer collaborated with Salman Khan for the tracks Pyaar Karona and Bhai Bhai, both were shot at Salman Khan's farmhouse and were released during the lockdown last year.