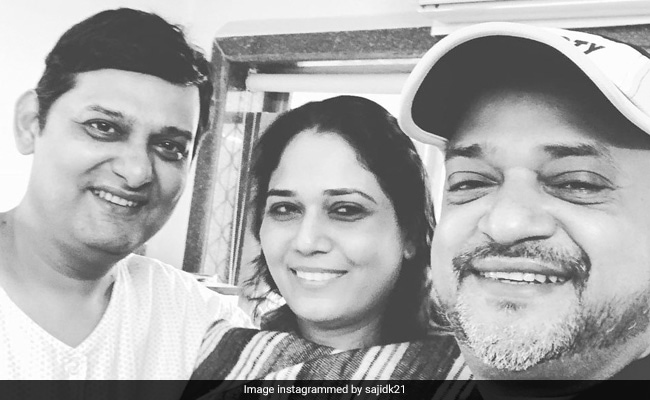 Celebrated composer Sajid Khan lost his brother Wajid in June last year. Sajid Khan, who leads the team Delhi Jammers on the reality show Indian Pro Music League, broke down on the sets remembering his late brother. Indian Pro Music League dedicated a special episode to late composer Wajid Khan as a tribute - Sajid was accompanied to the show by his mother Razina, and wife Lubna Khan. On the show, Sajid Khan and his mom shared an emotional moment as they revealed Lubna had donated a kidney to Wajid Khan. The late composer underwent a successful kidney transplant in 2019. Last year, he died at a Mumbai hospital because of complications from kidney infection, reported news agency PTI.

In an emotional video, Sajid Khan can be seen tearing up as he revealed they lost a huge amount of money in a case of fraud: "I used to wait at the airport for hours for people to come, but they'd never turn up." Then Lubna Khan stepped in to help Wajid with the kidney transplant, said Sajid. "Be there for your family," said Sajid Khan as he broke down on stage.

Talking about Wajid Khan, his sister-in-law Lubna said: "He was one of a kind. Wajid was my friend."

Sajid-Wajid made their debut as composers, creating music for Salman Khan's film Pyaar Kiya Toh Darna Kya in 1998 and continued composing songs for Salman Khan films in the years to come - they composed entire playlists for the Dabangg series of films, Partner and Welcome. Wajid Khan was also a playback singer and sang tracks such as Mera He Jalww, Fevicol Se, Chinta Ta Chita Chita, Mashallah, among others. Wajid Khan also sang the theme song of IPL 4, which was composed by the duo.

Jennifer Lopez, Alex Rodriguez Break Off Engagement: "We Are Better As Friends"