On Son Riaan's Birthday, Genelia D'Souza Promises To Be "Wind Beneath Wings" 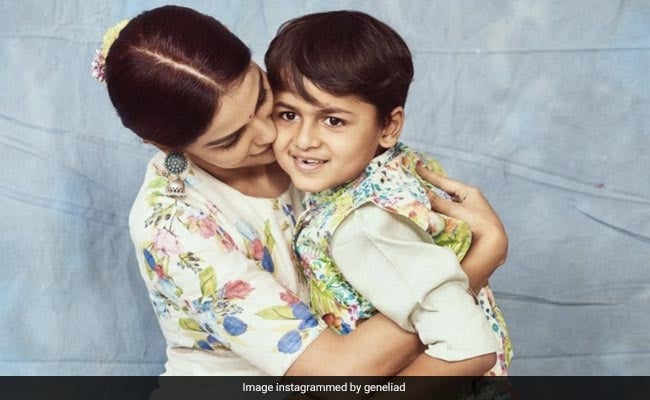 Genelia Deshmukh on Thursday shared an adorable post with her sons, wearing a cute little ethnic outfit. Genelia and Riteish Deshmukh's elder son Riaan turned seven today. Sharing the post, Genelia Deshmukh wrote: "I have a zillion wants, desires, and wishes for you but what you have taught me is that those are mine and not yours. So today I want to promise you that I will always put your wants before mine. When you want to fly, I will not try to be your wings but rather the wind beneath your wings." She also promised to be a supportive mom and wrote: "If you are don't hold the first place, I promise to not to get disappointed but rather show you the beauty of a second place or maybe even show you that being last in the line still has its own specialness, it's own grit, it's own determination but most of all to assure you that I will always be in front of you to cheer you on behind you to have your back and next to you so you aren't walking alone. Happy birthday, Riaan. I love you my brave boy"

The post also featured her two sons, Riaan and little Rahyl. Genelia and Riteish Deshmukh tied the knot on February 3, 2012 and later welcomed their elder son Riaan in November 2014 and younger son Rahyl in 2016. On the work front Genelia Deshmukh was last seen in Tere Naal Love Hogaya in 2012 and recently hosted a show Ladies Vs Gentleman along with her husband Riteish Deshmukh.