On Ranbir Kapoor's Big Day, Cousin Karisma Posts Throwback We Can't Get Over 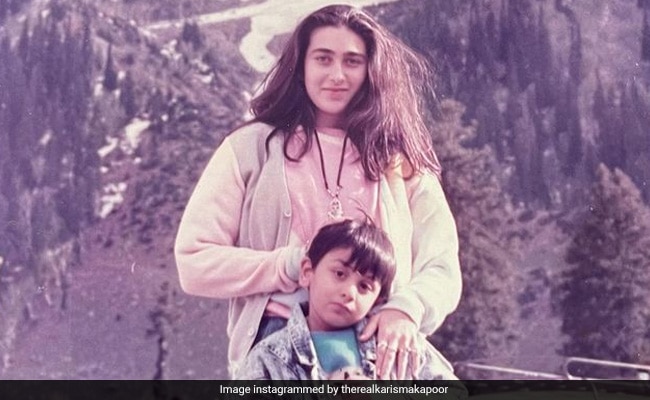 Karisma Kapoor shared wishes for two members of the Kapoor family, who share their birthdays today - cousin Ranbir Kapoor and aunt Rima Jain. Karisma Kapoor shared throwback pictures to wish both of them. She posted a throwback picture from Ranbir's childhood days and adorable can't even begin to describe it. For aunt Rima Jain, Karisma shared another precious throwback. "Two very special Kapoor's were born today! One who's soon to be a dad. And the other one who has the kindest heart. Happy Birthday Rima Aunty and Happy 40th Ranbir," she captioned it. She added the hashtag #familylove.

Ranbir Kapoor might be a social media recluse but he often features on sister Karisma's Instagram profile. After Ranbir's wedding, Karisma shared this picture from the festivities with Alia and Ranbir and she wrote: "Big Love for Mr and Mrs Ranbir Kapoor #aboutlastnight #merebhaikishaadihai."

After Ranbir and Alia's wedding, Karisma Kapoor shared this picture and she wrote: "Congratulations to this gorgeous couple. Wish you both a lifetime of happiness and more #familylove #merebhaikishaadihai."

Karisma also posted a picture of dad Randhir and cousin Ranbir from the wedding which took place in April.

Karisma and Kareena Kapoor are the daughters of actors Randhir Kapoor and Babita. They are the granddaughter of legendary actor and filmmaker Raj Kapoor and the great-granddaughter of actor Prithviraj Kapoor. Both are the top actors of their generations. Ranbir is the son of Neetu Kapoor and late Rishi Kapoor.

Ranbir Kapoor was last seen on Brahmastra, with wife Alia Bhatt. His next projects are an untitled film with Luv Ranjan, co-starring Shraddha Kapoor and Sandeep Reddy Vanga's Animal with Anil Kapoor and Rashmika Mandanna.