On Rajinikanth's Birthday, This Is How Son-In-Law Dhanush Wished Him

"The one and only superstar," Dhanush wrote in his wish for Rajinikanth 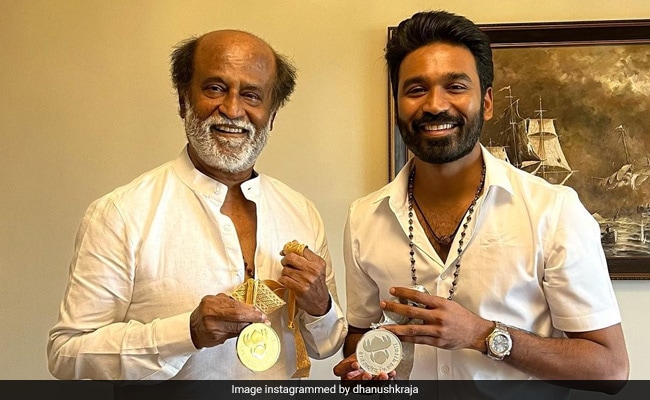 On Rajinikanth's birthday, the Internet is flooded with wishes from the superstars' fans on social media. Several actors from across the county wished the legendary actor on his special day. Rajinikanth celebrates his 71st birthday today. One such wish arrived from Rajinikanth's son-in-law and actor-director Dhanush. On Twitter, Dhanush wished his father-in-law with these words: "Happy birthday my Thalaiva." He added a couple of heart emojis and wrote: "The one and only Superstar Rajinikanth Sir... Love you so much."

Happy birthday my thalaiva !! The one and only SUPERSTAR RAJINIKANTH sir .. love you so much

At the 67th National Film Awards, Rajinikanth received the Dadasaheb Phalke Award - India's highest film honour - for his stupendous contribution to Indian cinema, while his son-in-law and actor-filmmaker Dhanush won the Best Actor Award for his performance in Asuran. He shared the award with Manoj Bajpayee, who won it for Bhonsle.

After receiving the award, Dhanush shared a photo of himself with his father-in-law and he wrote: "To win a National Award for best actor on the same stage where my Thalaivar was winning the prestigious Dada Saheb Phalke award was just indescribable." He added, "Thank you to the National award jury for bestowing me with this honour. Also thank you to the press and media for your constant support."

Rajinikanth was last seen in Annaatthe, which released on Diwali this year. Besides Rajinikanth, the film featured Nayanthara and Keerthy Suresh. The film had been directed by Siva. The film clashed with Rohit Shetty's action cop drama Sooryavanshi, starring Akshay Kumar, Katrina Kaif, at the box office.