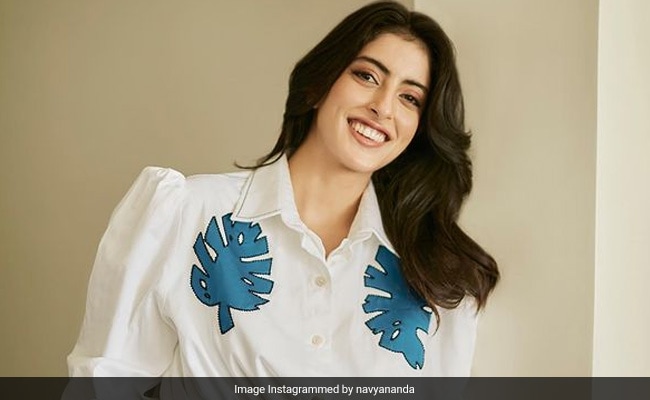 Navya Naveli Nanda treated her Instagram family to adorable pictures. Navya, who is the granddaughter of Amitabh Bachchan, looks beautiful in a white printed shirt paired with orange pants. Sharing the post, she dropped a ghost and heart emoticons in the caption. Soon after she shared the post, her mother Shweta Bachchan dropped an adorable comment. She wrote, "Love you". The post also attracted her friend Ananya Panday's attention, who dropped loved-stuck emoticons, while Khushi Kapoor, Shanaya Kapoor and Maheep Kapoor liked the post.

Navya Naveli Nanda, who recently started her own podcast What The Hell Navya, keeps her Insta family updated by sharing amazing pictures. On the occasion of Diwali, she dropped a happy picture of herself in an off-white traditional outfit and captioned it as "Happy Diwali"

Meanwhile, Navya Naveli Nanda recently spoke of NDTV's Arun Singh and opened up on grandmother Jaya Bachchan's comment on her podcast, where the veteran actress said, " "I have no problem if you have a child without a marriage also, I really don't have a problem." Speaking to NDTV, Navya said, "the conversation was easy, and we never felt out of our comfort zone." When asked if she expected the fuss that Jaya Bachchan's statement created in the media, Navy said, "I think the whole point of this podcast was to create a safe space for women, and I think we were able to do that, I felt confident enough and comfortable enough to talk to them about anything like relationships and friendships."

On the work front, Navya Naveli Nanda is the co-owner of Aara Health.