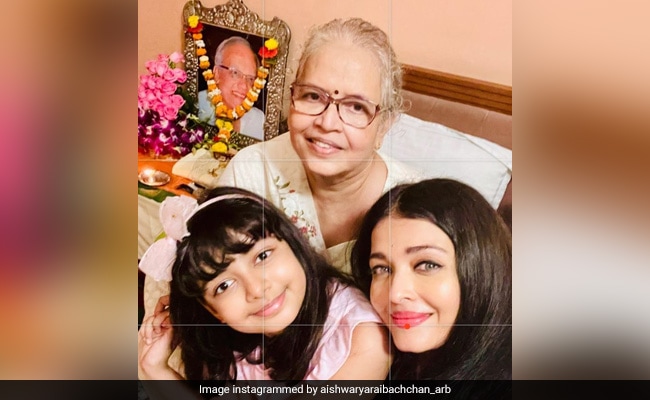 On her father Krishnaraj Rai's death anniversary, Aishwarya Rai Bachchan remembered him with fondness and a heart-warming post on Instagram. The 47-year-old actress shared a photo of herself along with her daughter Aaradhya and mom Vrinda Rai from what appears to be a puja at home in remembrance of Krishnaraj Rai. Aishwarya dedicated a message to her late father in her emotional post, writing: "We love you eternally. You and Us... Forever and Beyond," read Aishwarya's Instagram post. Aishwarya Rai Bachchan lost her father in 2017. Several members of the film fraternity paid their last respects at the prayer meet. Krishnaraj Rai is survived by wife Vrinda Rai, daughter Aishwarya and son Aditya.

Take a look at Aishwarya's post on her father's death anniversary here:

In December last year, Aishwarya marked her father's birth anniversary with a heartfelt post. Sharing a photo of Krishnaraj Rai, Aishwarya wrote: "Happy birthday, Daddy-Aijaa." She remembered her father as an "Ever smiling guardian angel" watching over them. "Love you eternally," an emotional Aishwarya added. Abhishek Bachchan too poured his heart out on Instagram as he paid tribute to Krishnaraj Rai. "Happy birthday dad, miss you," he wrote.

On her parents' wedding anniversary in 2019, Aishwarya shared a priceless throwback photo of Krishnaraj Rai and Vrinda Rai. She marked the day special with these words: "Love you eternally and beyond always. Happy 50th anniversary, my golden angels."

In terms of work, Aishwarya Rai Bachchan was last seen in Fanney Khan. She will reunite with Abhishek Bachchan on the big screen for Anurag Kashyap's Gulab Jamun. Aishwarya is also part of Mani Ratnam's upcoming movie Ponniyin Selvan.