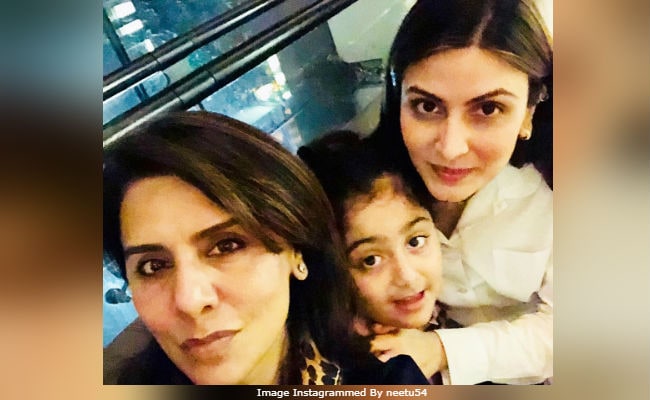 New Delhi: "Sooper dooper Women's Day to all the wonderful beautiful women," wrote Neetu Kapoor on Instagram, sharing a picture of herself with daughter Riddhima Kapoor Sahni and granddaughter Samara. The picture of the trio is adorable and Samara, all of six, looks too cute. "Happy, happy mommy," commented Riddhima on Neetu's post. Neetu Kapoor and actor Rishi Kapoor have been married since 1980. Riddhima and actor Ranbir Kapoor are the couple's children. Ridhima, a jewellery designer, is married to businessman Bharat Sahni. Meanwhile, on International Women's Day, Rishi Kapoor tweeted, "Every day should be Women's Day." See Neetu and Rishi Kapoor's Women's Day posts here.

Sooooper doooper Women's day to all the wonderful beautiful women

Thank you. Every day should be Women's Day https://t.co/Wj3G0NgsMn

Last month on Valentine's Day, Neetu Kapoor posted a throwback picture of children Riddhima and Ranbir with an adorable caption that read, "'V' on the heads of my valentines."

'v' on the heads of my valentines

Neetu Kapoor's Instagram feed is full of cute pictures and videos of little Samara. A picture of her with uncle Ranbir is our current favourite.

Promoted
Listen to the latest songs, only on JioSaavn.com
Have a look.

Happy children's day to all the Bachas

Rishi and Neetu Kapoor have co-starred in films like Kabhi Kabhie, Amar Akbar Anthony, Rafoo Chakkar and Khel Khel Mein. They were last seen together in 2013's Besharam, which also starred their son Ranbir. Rishi Kapoor was last seen in Patel Ki Punjabi Shaadi, which released last year. He has two projects lined up - 102 Not Out with Amitabh Bachchan, and Mulq. Amitabh Bachchan, 75, and Rishi Kapoor, 65, are co-stars of films like Kabhie Kabhie, Naseeb, Amar Akbar Anthony and Ajooba. 102 Not Out, directed by Umesh Shukla, releases on May 4.
Comments
international women's dayneetu kapoor