On International Dance Day, a Guide to Govinda's Best Moves in GIFs 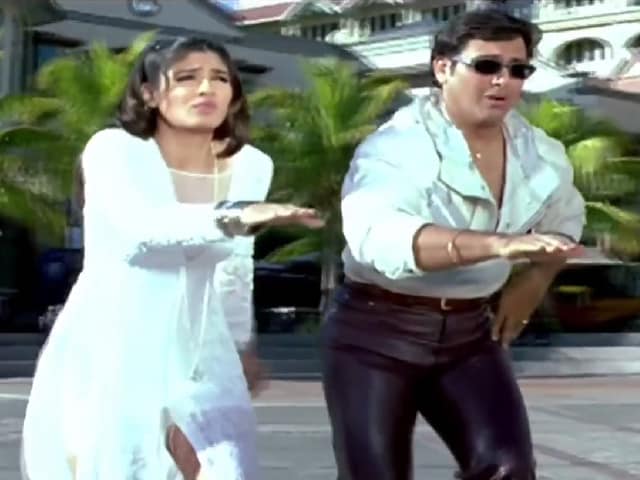 Govinda and Raveena Tandon in a still from Bade Miyaan Chote Miyaan.

New Delhi: Much loved, sometimes mocked, often copied, actor Govinda is the arguably unchallenged king of dance in Bollywood (sorry, Hrithik fans). In a career spanning almost three decades, Govinda has made his own brand of dance routines famous in hit songs such as Ankiyon Se Goli Maare, Kisi Disco Me Jaye, Aa Aa Ee and others. In doing so, he has created an entire genre of Bollywood dance in itself.

In his dance numbers, mostly opposite actresses Karisma Kapoor and Raveena Tandon, Govinda has offered lessons in the how to ask a woman for her phone number, take her on a date, calm her tantrums and even how to show her a tantrum or two of your own.

The actor's moves spans the gamut from the predictable pelvic thrust to the goofy to even lyrical, 'hip hop' and Michael Jackson style (with a Govinda twist).

On International Dance Day, here's a sample of some of Govinda's best songs in GIFs:

Tu Mera Superman from Dariya Dil, 1988:
This is how it would NOT look if Superman romanced Spider-er-woman. Nonetheless, we have to cheer Govinda and Kimi Katkar for sheer bravura in wearing superhero costumes and grooving around in city parks.

Tujhe Mirchi Lagi To Mai Kya Karu from Coolie No. 1, 1991:
For Govinda, the possibilities are limitless. A simple dance on the streets while treating your wife (played by Karisma) to some bhel puri seems like a plan.

O Lal Dupatte Wali from Aankhen, 1993:
Oh look! He can also do magic while dancing.

Stop That, Meri Baatein Sunkar Hasna Nahin from Gambler, 1997:
This song is too good to be reduced to a clip of a few seconds. Take a look and DON'T STOP THAT.

Kisi Disco Me Jaye from Bade Miyan Chote Miyan, 1998:
This song and dance sequence was a rage when it first released. It can still instantly revive a dull party.

I Love You Bol Daal from Haseena Maan Jayegi, 1999:
Don't you just love Govinda making dance steps out of nothing?

Soni De Nakhre from Partner, 2007:
With Soni De Nakhre, Govinda showed that the trick to woo a high society girl at her posh party is to dance like this:

Chicks dig that, he told Salman!

G Phaad Ke from Happy Ending, 2014:
And by the time it was 2014, the actor was flirting (with someone else's girlfriend) and taking the dance floor by storm again with his impeccable moves.

Promoted
Listen to the latest songs, only on JioSaavn.com
Image courtesy: Eros