On First Wedding Anniversary, Yami Gautam And Aditya Dhar Wished Each Other Like This 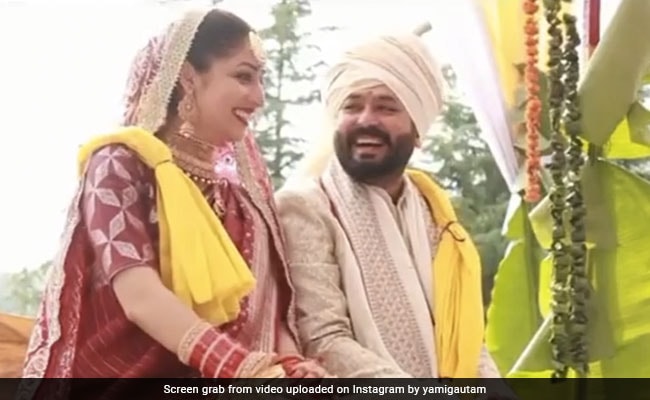 Congratulations to Yami Gautam and Aditya Dhar on their first wedding anniversary. Special occasion calls for a special post and the couple decided to do just that on Saturday. Both Yami and Aditya Dhar shared the same video with the same caption on their respective social media profiles. The video has moments from their intimate albeit lovely wedding ceremony in Himachal Pradesh. Posting the video, Yami and Aditya Dhar captioned the post: "For all you do, for who you are, I will be forever grateful you are in my life. Happy 1st Anniversary."

Yami Gautam and Uri director Aditya Dhar, who worked together in the 2019 film, got married in an intimate ceremony last year. The couple shared identical posts on Instagram and wrote: "With the blessings of our family, we have tied the knot in an intimate wedding ceremony today. Being very private people, we celebrated this joyous occasion with our immediate family."

Yami Gautam was last seen in Dasvi, co-starring Abhishek Bachchan and Nimrat Kaur. She also featured in A Thursday. She has starred in movies like Bala, Yuddham, Badlapur, Sanam Re, Ginny Weds Sunny, Kaabil and Uri: The Surgical Strike. She made her Bollywood debut with Vicky Donor, co-starring Ayushmann Khurrana.