Arpita's photo, which is simply captioned: "Eid Mubarak, from ours to yours," features her parents Salma and Salim Khan along with her kids 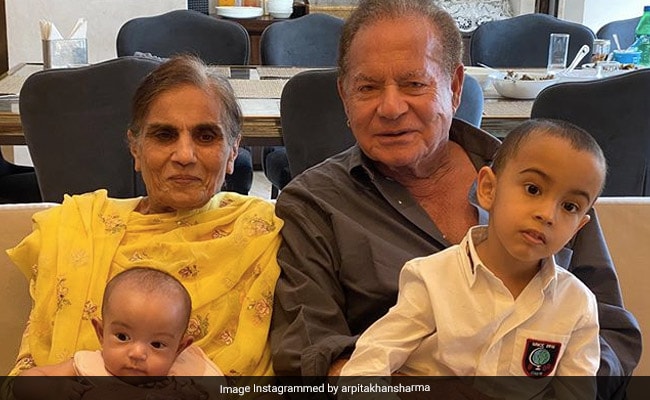 Salman Khan's sister Arpita Khan Sharma celebrated Eid with her family on Sunday and shared an adorable photo on Instagram, sending best wishes and blessing to her fans. Arpita's photo, which is simply captioned: "Eid Mubarak, from ours to yours," features her parents Salma and Salim Khan along with her son Ahil and daughter Ayat Sharma. Arpita and Aayush Sharma got married in November 2014 and the couple welcomed their first child Ahil in November 2016. He's now 4. Arpita and Aayush's daughter Ayat was born on Salman Khan's birthday on December 27 last year. Take a look at Arpita's fam-jam photo here:

Eid Mubarak from Ours to Yours.

Salman Khan is currently in his Panvel farmhouse, where he has been staying with a few friends since the lockdown was imposed. Arpita and Aayush, along with their kids, were also quarantined with Salman at his farmhouse but appear to have returned home in Mumbai. In messages on Instagram, Salman Khan had said that he misses being with his parents during the lockdown.

Speaking to Times Of India on Eid, Salim Khan said that he exchanged Eid greeting with his son over phone: "He has been spending a lot of time there. I just spoke with him today on the phone and we exchanged wishes. We are always in touch with each other through our regular phone calls." Mr Khan added they even skipped indulging in a special menu on Eid: "Bilkul nahi, bass regular khaana hi bann raha hai."