"My Kohinoor, my sahab, the man of my dreams, my Yusuf jaan," tweeted Saira Banu 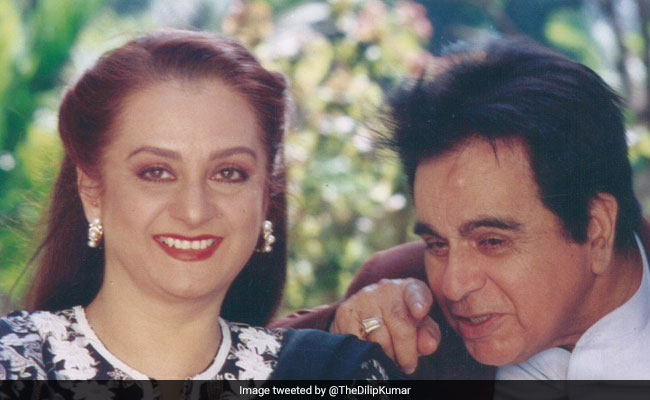 Thursday marked a special day for both Dilip Kumar and his wife Saira Banu - the 95-year-old actress returned home from the hospital on October 11, which marked their 52nd wedding anniversary. Dilip Kumar was being treated in Mumbai's Lilavati Hospital for recurrent pneumonia. Saira Banu, who often operates Dilip Kumar's Twitter handle, sent out the sweetest message for the legendary actor on their special day and also thanked fans and followers for sending good wishes. Addressing Dilip Kumar in the sweetest of words - "My Kohinoor, my sahab, the man of my dreams, my Yusuf jaan" - Saira Banu wrote: "I can't thank enough - the millions of well-wishers, friends and family for your beautiful messages, calls and greetings on our 52 years of marriage today, attaching a personal fav."

Saira Banu also attached a priceless piece of throwback photo, featuring herself along with Dilip Kumar, to the tweet. Dilip Kumar, who was born as Mohammad Yusuf Khan, married Saira Banu on October 1966. Read her tweet here.

Message frm Saira Banu: My Kohinoor, my sahab, the man of my dreams, my Yusuf jaan and I can't thank enough- the millions of well-wishers, friends and family for your beautiful messages, calls and greetings on our 52 years of marriage today, Attaching a personal fav. photo -SBK pic.twitter.com/1mViBY3tN4

Meanwhile, we also spotted these blasts from the past re-tweeted on Dilip Kumar's timeline, orginally shared by fan-clubs:

On Thursday evening, Dilip Kumar's family friend Faisal Farooqui tweeted to say that the actor has been advised 'complete rest' upon his return home. Dilip Kumar was admitted to Mumbai's Lilavati Hospital on Sunday night, the morning after which, the hospital told news agency PTI: "He (Dilip Kumar) is stable now. There is nothing to worry about."

In the past few years, Dilip Kumar has been in and out of the hospital several times and has had visitors like Shah Rukh Khan and Priyanka Chopra checking up on him. Saira Banu often shares health updates about the actor on his Twitter account and thanks fans and well-wishers for their prayers. In July this year, Saira Banu tweeted about attending a function "without" Dilip Kumar in an emotional tweet and wrote: "I felt lonely without Sahab, but was overjoyed to bless the couple and interact with so many of you."

29 June'18 was one of the RARE times I attended a social event without my Kohinoor (my Sahab) besides me. I went for the nikah of Nida, daughter of Asif Farooqui. I felt lonely without Sahab, but was overjoyed to bless the couple and interact with so many of you. -SBK

Dilip Kumar's actress wife recently dismissed reports claiming the actor is unable to recognize his acquaintances and close ones and told PTI. "Who says that? I would not give that any cognizant at all. All is well, all is fine and nothing of this sort."

Dilip Kumar and Saira Banu have featured together in films such as Sagina Mahato, Chhoti Bahu and Duniya. Dilip Kumar, who was born as Mohammad Yusuf Khan, is best known for his starring roles in films like Madhumati, Devdas, Mughal-e-Azam, Ganga Jamuna, Ram Aur Shyam and Naya Daur in a career spanning over six-decades.

Dilip Kumar was honoured with the Padma Vibhushan in 2015, the Padma Bhushan in 1991 and the Dadasaheb Phalke Award in 1994.