On Amitabh Bachchan's 78th Birthday, The Most Utterly Butterly Wish Arrived From Amul 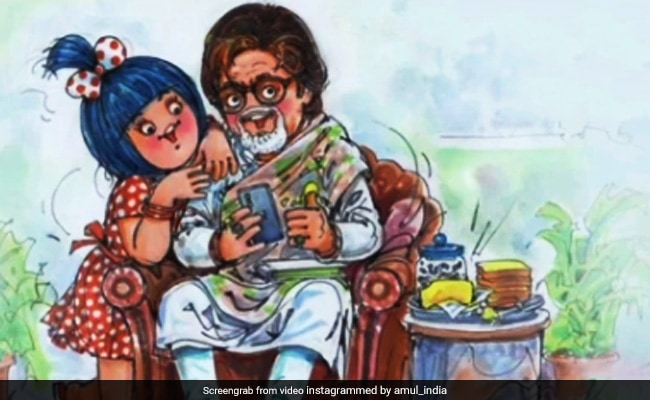 A still from the video posted by Amul. (courtesy: amul_india)

On Amitabh Bachchan's 78th birthday, social media is filled up with greetings for the veteran actor. From his never-ending list of fans to Bollywood stars, everyone had posted wished for the actor on social media. However, the wish that absolutely stole our heart, arrived from the dairy brand Amul, which is known for its quirky topicals. Amitabh Bachchan's life depicted through Amul topicals makes for a perfect birthday gift. The brief video is a compilation of some of the best topicals dedicated to the actor. It highlights some of the biggest moments of Big B's life. From Big B's wax statue at Madame Tussauds, to Sholay releasing in 3D, and Big B recovering from coronavirus. Not to mention the subtle references to some of his most iconic films, the video has it all. At the end of the video, the text: "Aby toh mai jawaan hun," flashes on the screen.

Sharing the post on Instagram, the caption on the official Instagram handle of Amul read, "Amul wishes a very happy birthday to Amitabh Bachchan. #HappyBirthdayBigB." As of now, Big B hasn't responded to Amul's post but we would love to see his reaction. Meanwhile, checkout the post here:

Big B, who celebrates his 78th birthday today, thanked his fans on social media. He wrote in his post "Your generosity and love be the greatest gift for me for the 11th .. I cannot possibly ask for more."

.. your generosity and love be the greatest gift for me for the 11th .. I cannot possibly ask for more ..