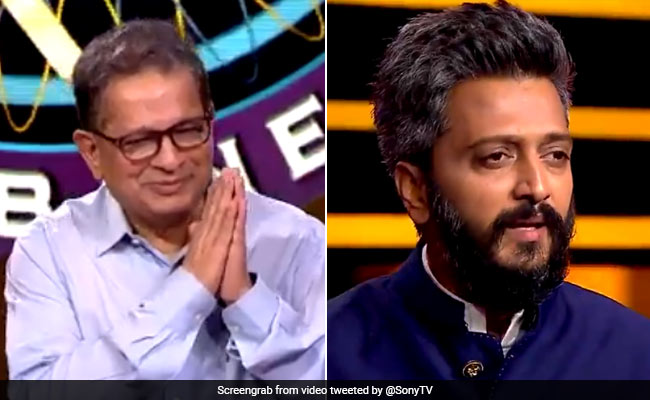 As is ritual with Kaun Banega Crorepati, Amitabh Bachchan wrapped the week with an episode dedicated to a 'Karamveer'. On Friday, he welcomed Dr Sunil Shroff, who is the founder of Mohan Foundation, an organization that has been championing the cause of organ donation. Joining the real life hero was actor Riteish Deshmukh, who, along with his wife Genelia, have pledged to be organ donors. Amitabh Bachchan began by saying that having Dr Sunil Shroff as a guest on the show was a "big honour" for him. Dr Sunil Shroff's NGO has helped as many as 11,609 lives through his NGO, which has been awarded the best performing NGO by the Indian government. The episode also played out heart-wrenching snippets of organ recipients, who shared their experiences of undergoing transplants, which turned out to be life changing experiences for them. Dr Sunil Shroff also shared some valuable information about the "miraculous" science of organ transplantation.

Riteish Deshmukh also opened up about the time he lost his father politician Vilasrao Deshmukh. Riteish said that his father required a liver transplant and the actor himself decided to be the donor, which eventually did not work out because of medical complications. Riteish teared up on the show when a family recounted their story of losing their young son. Riteish Deshmukh and Dr Sunil Shroff won Rs 25 lakh for the Mohan Foundation NGO.

Ahead of the 'Karamveer' segment of the show, Mr Bachchan had continued the game with roll-over contestant Mrinalini Dubey, who became the first contestant to win Rs 25 lakh in this season of Kaun Banega Crorepati.

Here are some of the questions from the Karamveer special episode of Kaun banega Crorepati 12:

# Which bridge is this - India's first sea bridge?

# Who holds the record for the most medals won by a woman at the Olympics?

# A rare occurrence is indicated by the proverb "Eid ka..." what?

# Polaroid and DSLR are both types of what?

# What are the end links of Rajiv Gandhi sea link?

# What is 'kathi' in the name of the popular dish 'kathi kebab'?

# In June 1974, which movement was started by Loknath Jayprakash Narayan at the historic Gandhi Maidan in Patna?

Amitabh Bachchan will return to the small screen on Monday with yet another intriguing episode of Kaun Banega Crorepati 12.