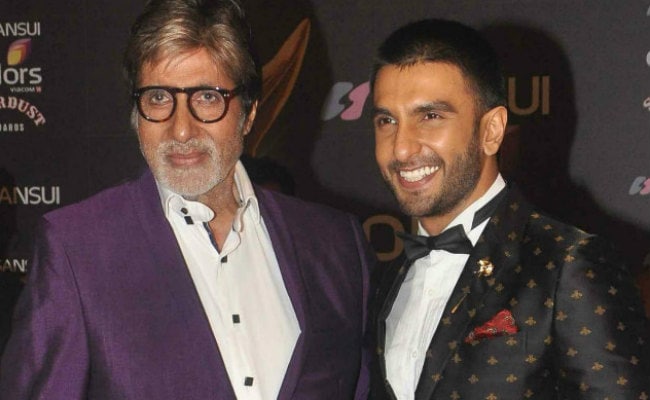 New Delhi: As Amitabh Bachchan added one more year of seniority today (he turned 75), fanboy Ranveer Singh tweeted the most adorable wish ever. Sharing a photograph of himself along with the megastar, Ranveer declared October 11 as the "Amitabh Bachchan Day" - this is such great news for fans of the Bollywood shahenshah. "Greatest of all time," he added in his tweet. Ranveer, a self-proclaimed Amitabh Bachchan fan, has previously confessed that he's achievements are results of the inspiration he drew from the veteran actor: "I am a Hindi film fan first, then an actor. And if you are a Hindi film fan, you are an Amitabh Bachchan fan," he said at the NDTV Indian of the Year awards.

PS: Big B had also wished Ranveer when he turned 32 in July this year (more on that later). Read Ranveer's 'Happy Birthday' message for Amitabh Bachchan.

Fans of Ranveer loved the tweet and quickly took the opportunity to share more photos of the two together.

Big B, who appears more comfortable sending text messages than WhatsApp, complained that Ranveer did not respond to his birthday wish. But how could he have missed a text from Big B, said Ranveer, adding: "It's these little things that make you the greatest of all time. I'm blessed you even know I exist."

Except that i TOTALLY replied! I just cross checked it too! You were in fact one of the first to even wish!

Birthday messages have poured in for Amitabh Bachchan in all shapes and forms on Twitter, with celebrities like south superstar Nagarjuna, cricketers Sourav Ganguly and Virender Sehwag wishing the actor on Twitter. "Happy birthday Amitabh Bachchan! India is proud of his cinematic brilliance and support to many social causes. I pray for his long and healthy life," tweeted Prime Minister Narendra Modi while this is how President Ram Nath Kovind wished the legend: "Birthday wishes to Amitabh Bachchan, film icon as well as unstinting advocate of social causes and nation building missions."

Happy birthday @SrBachchan! India is proud of his cinematic brilliance & support to many social causes. I pray for his long & healthy life.

Happy birthday to the one and only Amit ji @SrBachchan wishing you good health and happiness always pic.twitter.com/xK1XZaSj5n

A very happy birthday to a superstar and a awesome gentleman.....ask me @SrBachchan

Happy Birthday to the legend , the greatest superstar of our country, @SrBachchan . Baduuumbaaa#Happy75thBirthdayABSirpic.twitter.com/0XXsfnfKFc

Promoted
Listen to the latest songs, only on JioSaavn.com
Amitabh Bachchan is "overwhelmed" with the greetings:

T 2574 - The affection of greeting for the 75th, displayed over several mediums, overwhelms me .. a thank you shall never be enough pic.twitter.com/BH6d9JgsHW

Ranveer Singh will next be seen in Sanjay Leela Bhansali's Padmavati, the recently released trailer of which has been watched and loved by Amitabh Bachchan. Big B has films like Thugs Of Hindostan, 102 Not Out and Padman in the pipeline.