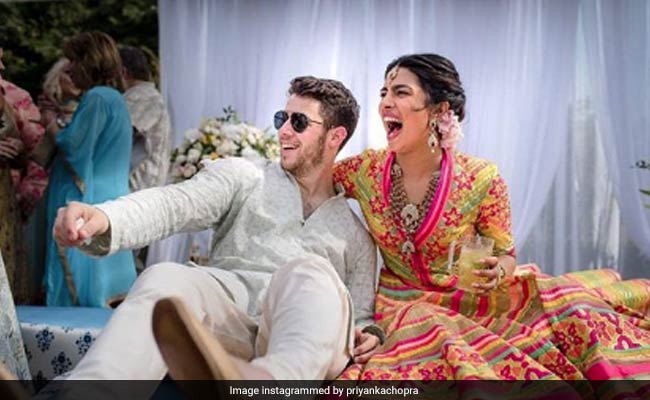 Priyanka Chopra, who married Nick Jonas in Jodhpur's Umaid Bhavan Palace earlier this month, shared a glimpse from her mehendi ceremony on her Instagram stories. Priyanka shared a photo of Nick's mehendi pattern which read: 'Om Priyankay Namah'. Priyanka and Nick's mehendi ceremony took place a day prior to their Christian wedding (December 1) in the same venue. Priyanka and Nick had two wedding ceremonies. The Christian wedding was followed by a Hindu wedding on December 2. Some inside photos from the wedding festivities was also shared by Sudeep Dutt, Priyanka's best friend's husband. Priyanka and Nick's wedding was followed by a reception party in New Delhi, which was attended by Prime Minister Narendra Modi. The couple rounded off their wedding celebrations with a reception party in Mumbai, which was attended by the creme de la creme of Bollywood.

Priyanka and Nick celebrated their first Christmas post-wedding with their respective families in London and the couple have been continually updating fans with snippets from their vacation on Instagram. Soon after their Mumbai reception, the couple flew off to London accompanied by Priyanka's mother Madhu Chopra and brother Siddharth.

Here are glimpses from Priyanka and Nick's London vacation with their families:

From our family to yours. Merry Christmas

Several photos of the couple dining out with their families at a restaurant in London have also been shared by several fan clubs.

Priyanka Chopra and Nick Jonas are expected to host a reception party in Los Angeles next month.