'Of Course, Alia Bhatt And Ranbir Kapoor Are In Love.' Mahesh Bhatt Says 'Don't Need A Genius To Get That'

The paparazzi have spotted Ranbir Kapoor hanging out with Alia and Mahesh Bhatt at their residence in the recent past. 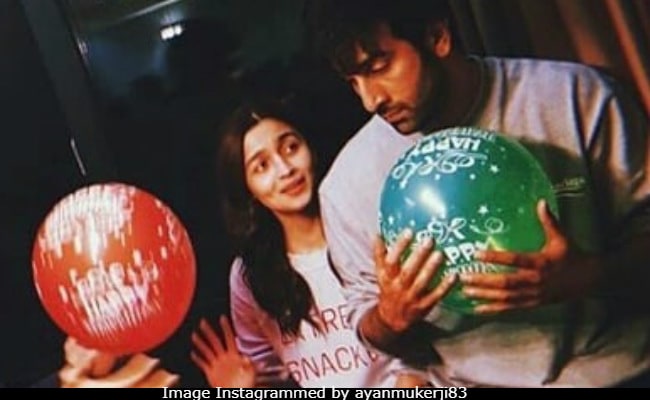 Nothing much, just a cool pic of Alia and Ranbir (courtesy ayanmukerji83)

Alia Bhatt's filmmaker father Mahesh Bhatt spilled the beans on his actress daughter's relationship status with Ranbir Kapoor in a recent interview with The Telegraph and said: "Well, of course they're in love. You don't need to be a genius to get that!" Now, if that's not a confirmation that Alia and Ranbir are seeing each other then we don't know what is. Alia appeared to confirm she's dating Ranbir on Koffee With Karan 6's debut episode for the first time, when Karan Johar commented on their then-rumoured relationship and Alia didn't really lodge protests. Now, in his interview with The Telegraph, Mahesh Bhatt added that he's quite fond of Ranbir: "I love Ranbir... he's a great guy." The paparazzi spotted Ranbir Kapoor hanging out with Alia and Mahesh Bhatt at their residence in the recent past.

In his interview, Mahesh Bhatt added that whether Ranbir and Alia want to take their relationship a notch higher is completely their prerogative and that he will always be supportive of whatever decision they go ahead with: "What they do to their relationship is something they'll have to figure out. Whether it's heading towards that port called 'marriage' - which is an institution that needs to be questioned in the second decade of the 21st century - is something for them to figure out," said Mr Bhatt and also added: "I'm no one to hazard a guess when that would happen or which way the relationship is going. Its life and life needs to be lived on its own terms. Let's wait and see what tomorrow brings for us!"

Mahesh Bhatt's interview to The Telegraph is perhaps the first time he's spoken about Alia and Ranbir so openly. In August this year, he addressed the often-asked question about his youngest daughter and told news agency IANS: "I have never spoken about my children's private lives. They are adults and it is their prerogative. I would never demean and belittle them by talking about it in public. It's their right and if they want to talk about it or to remain silent about it; it's their choice. I respect what they do with their life."

Alia Bhatt, who has always been a self-proclaimed fan of Ranbir Kapoor, fuelled speculation that she's dating the 36-year-old actor after she posted a photo of them together from Sonam Kapoor's wedding reception on Instagram in May. Ahead of that, in March this year, Ranbir was asked if he's dating Alia, when he told GQ: "It's really new right now, and I don't want to over speak." Meanwhile, Alia also met Rishi Kapoor in New York and went on dinner outings with Ranbir's family in Mumbai.

Alia Bhatt and Ranbir Kapoor are collaborating for the first time with Ayan Mukerji's Brahmastra. They co-star with Amitabh Bachhcan in the film, which is expected to hit screens next year.