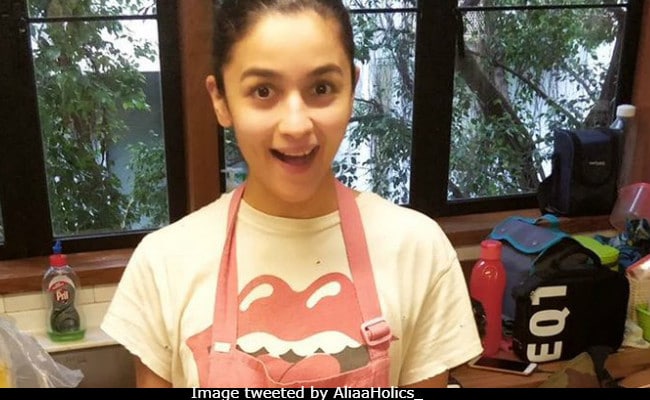 In pictures on social media recently, Alia Bhatt was spotted baking - the photos made it to Instagram just in time on Ranbir Kapoor's birthday and hence, the Internet did not find it difficult to join the dots. The 25-year-old actress appeared to be baking a birthday-special cake for Ranbir and her culinary skills have been documented step-by-step by chef Harsh Dixit and shared on his Instagram stories. Fan clubs were quick to curate the moments and share the photos on social media. Alia redefines cuteness in the pictures, dressed in casuals with an apron thrown over and home slippers. "Most important ingredient to bake a good cake... keep smiling! If you can't, lick some pastry cream and frosting and smile again!" read the caption on one of the stories. Looks like Alia did a fantastic job smiling ear-to-ear in the pictures.

Here's how the birthday-special pineapple brulee cake turned out to be. Ranbir Kapoor celebrated his 36th birthday on Friday.

Alia bakes a cake for her sunshine @aliaa08pic.twitter.com/PWWHbBwh3s

Interestingly, a recent report in Filmfarealso stated that Alia has taken charge of maintaining a clean diet for Ranbir and there's no room for junk in it. "She has created a balanced diet for him. All the junk food is out and Ranbir, like an obedient child, is following his girlfriend's instructions," Filmfare quoted a source as saying.

That's not all, Alia also sent out a birthday greeting to Ranbir, which read: "Happy Birthday Sunshine." Our hearts are aflutter!

On the evening of his birthday, Ranbir Kapoor met fans and followers in Mumbai, after which, he rounded off the day with a blockbuster party, which included the likes of Binoy Gandhi, Rohit Dhawan, Jaanvi Desai, Juno Chopra and of course Alia Bhatt!

Alia Bhatt and Ranbir Kapoor don't just trend for their rumoured romance but also for their first film together Brahmastra. Directed by Ayan Mukerji, Brahmastra is being made as a trilogy, the first part of which will release next year.