October will have a global theatrical release on April 13 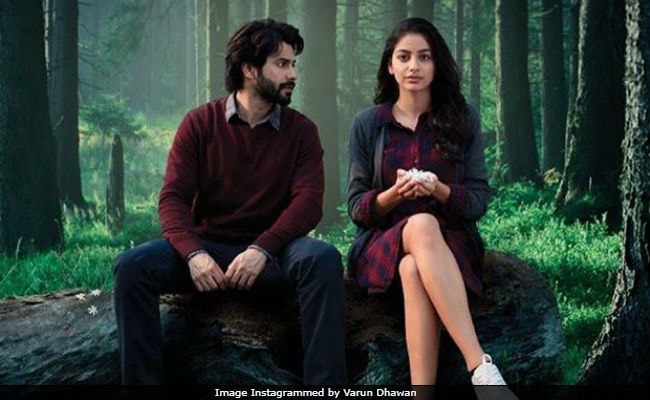 New Delhi: Varun Dhawan's much-awaited film October will be releasing tomorrow. The Shoojit Sircar-directed film, also starring newcomer Banita Sandhu, has revved up curiosity with its trailer, which leaves behind so many open-ended questions. In the film, Varun plays Danish Walia, a hotel management trainee while Banita plays his fellow batch-mate Shiuli, who is a trainee at the same hotel where Dan works. Right from the beginning Varun Dhawan made it quite clear with his social media posts and interviews that October is nothing like any conventional love story. A month before the film's release, Varun had tweeted, "October is not a movie about love at first sight. It's not a movie about hugs, kisses and dates."

October was not an easy project for Varun Dhawan and Banita Sandhu. For his role, Varun had to do odd jobs such as cleaning toilets, serving breakfast to guests and doing laundry. During the shoot, Varun had tweeted, "Shot and lived real hotel where my job was to serve breakfast, clean toilets, make beds and even do the laundry."

Banita, 20, had to hire a 'Hindi tutor' to help her prep for the role. Speaking about which, she told news agency IANS, "The film was offered to me a year before it was shot. So I hired a Hindi tutor. I was learning the language along with my university classes. Learning a language like Hindi when you live in London and people around you speak in English, it is very hard to pick it up."

Talking about the experience of working with Shoojit Sircar, Varun had earlier told IANS, "Dada (Shoojit) asked me what do I do when I wake up. I said, 'As usual, I check my phone, I post things on social media'. Then he asked me not to do that, and instead observe a plant for 10 minutes. I started doing that and felt a huge change. I unlearned a lot... It was a very different experience." He added, "I don't want to say much about it, but this film has definitely impacted me so much as a human being. I think it has definitely changed me as a human being."

Varun Dhawan's October has already received positive reviews from megastar Amitabh Bachchan and Karan Johar. A private screening of October was recently held, which was attended by several Bollywood celebrities. Mr Bachchan shared a rather poetic review for October along with pictures of Shiuli flowers while Karan Johar was all praises for Banita Sandhu's performance as Shiuli.

Take a look at Amitabh Bachchan and Karan Johar's review of October.

T 2772 - "OCTOBER" film, (harshringaar ), gentle, soft, Krishn called it 'Paarijaat', in Bengal 'Shiuli'
unique tree, does not wait flowers to give fruits or seeds... blooms in moonlight... sheds the flowers before sunrise, like a weeping shower... pic.twitter.com/o0N8M3iX8D

#October is absolutely beautiful... just beautiful....sucks you into its world and absorbs you completely...I felt like I was standing there with the characters and feeling their every beat and emotion....@ShoojitSircar and @writeonj are a genius team!

@BanitaSandhu is so so lovely! Her stillness and silences speak volumes ! She has a striking and supremely heartening presence ! Welcome to the movies! Huge mention to Gitanjali Rao for her brilliant performance! #october

Varun Dhawan had shared a picture of him with father David Dhawan and Karan Johar on his Twitter and wrote, "2 dads and one dada @karanjohar @ShoojitSircar #DavidDhawan. Last night I was all nerves as my dad and Karan saw October as well as @ShashankKhaitan but this picture is a memory I shall never forget. #legends."

2 DaDS and one dada @karanjohar@ShoojitSircar#DaViddhawan. Last night I was all nerves as my dad and Karan saw #October as well as @ShashankKhaitan but this picture is a memory I shall never forget. #legendspic.twitter.com/T7x9vm7gqA

Promoted
Listen to the latest songs, only on JioSaavn.com
October will have a global theatrical release on April 13. The world premiere for October was held in Dubai on April 11, which was attended by Varun Dhawan and Banita Sandhu.