Chhalaang: The film was earlier scheduled to hit theatres on March 13 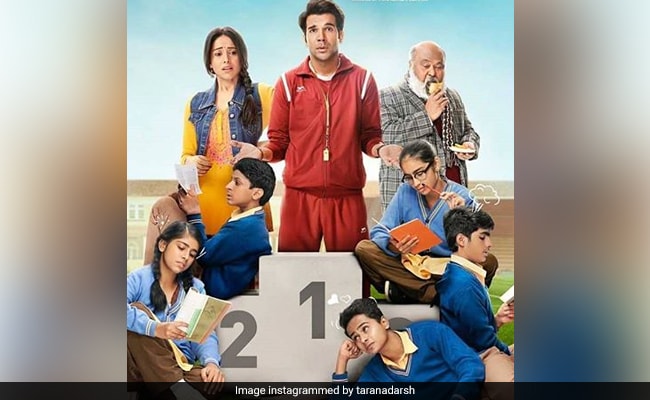 Chhalaang: A promotional poster of the film. (Image courtesy: rajkummar_rao)

Rajkummar Rao and Nushrat Bharucha's Chhalaang, which was earlier scheduled to hit theatres on March 13, got a new release date on Thursday. The comedy drama will now be releasing on June 12 this year. Announcing the update on social media, Rajkummar Rao, who will play a sports teacher in Chhalaang, shared a new poster and wrote: "Ab lenge Chhalaang June 12th ko! Masterji khilayen kaise? Bachche busy hain exams ki padhayi mein. Toh masterji khilayenge garmi ki chhuttiyon mein! Exams ke liye best of luck!" The poster features Rajkummar, Nushrat Bharucha and Saurabh Shukla standing on a playground with a couple of students sitting around them with books in their hands.

This is not the first time the makers have changed the film's release date. Chhalaang was initially scheduled to release on January 31 but the makers postponed the film by 3 months and announced March 13 as its release date. Now, the film is slated to open in theatres on June 12.

Directed by Hansal Mehta and produced by Ajay Devgn, Luv Ranjan and Ankur Garg, Chhalaang is set in a small town of Uttar Pradesh. It will also feature Mohammed Zeeshan Ayyub in pivotal role. The film got a new title last year as the makers changed its name from Turram Khan to Chhalaang.

Chhalaang will mark Rajkummar Rao's sixth collaboration with Hansal Mehta. The duo have previously worked together in Shahid, CityLights, Aligarh, and Omerta. The film will be Rajkummar and Nushrat's first project together.