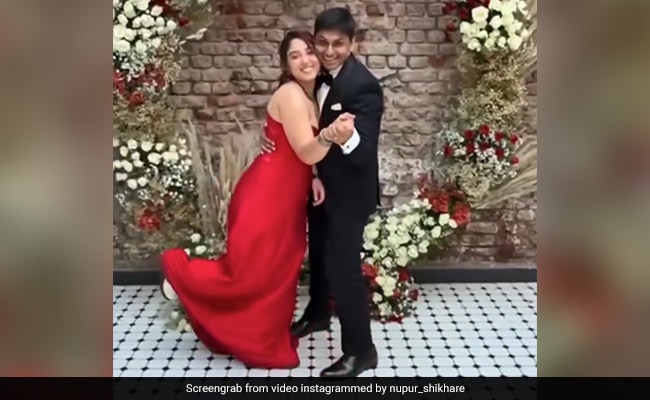 Aamir Khan's daughter Ira Khan, who got engaged to boyfriend Nupur Shikhare in September this year, hosted an engagement party last month. Nupur Shikhare decided to look back at the day and shared a mushy video from the engagement party on his Instagram profile on Wednesday. In the video, Ira Khan and Nupur Shikhare can be seen posing, kissing and even dancing a little. The fitness trainer captioned the post: "I'll be there for you." In the comments section, Ira Khan wrote: "I know you will I love you always." In a separate comment, he wrote: "Awwwliieee, what a dramatic, mushy, cutie cutie you are."

Last week, Nupur Shikhare posted this super cute picture from the party with Ira Khan and he wrote: "I see you."

Ira Khan and Nupur Shikhare in pictures from their engagement party. No caption needed.

On the professional front, Ira made her directorial debut with a theatrical adaptation of Euripides' Medea, which featured Hazel Keech in the titular role. It premiered in different cities across India in December 2019. Ira has studied music, while her brother Junaid often assists father Aamir Khan in filmmaking.

Ira is the younger of Aamir Khan's two children with his first wife Reena Dutta. Aamir Khan, who was married to filmmaker Kiran Rao for 15 years, announced divorce in July last year. They continue to co-parent son Azad.