Genelia D'Souza Is Just A Girl Standing In Front Of Monday, Asking It To Be Friday

Genelia D’Souza is exactly the dose of entertainment and fun you need to have a happy day. 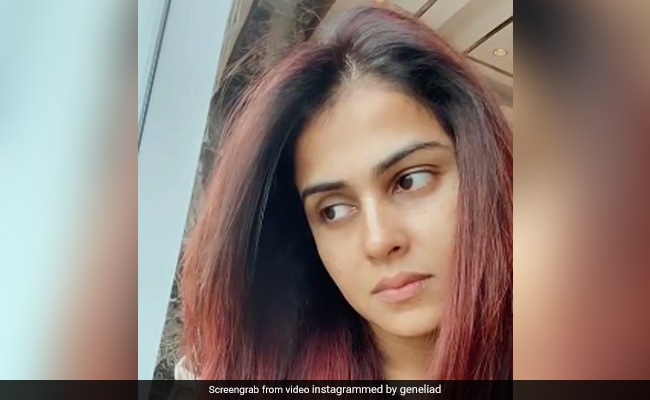 Genelia D'Souza in a still from the video. (Image courtesy: geneliad)

In case you wanted a little dose of drama to make your dull workday exciting, Genelia D'Souza's Instagram timeline is exactly where you need to head. It is a treasure trove of fun, dramatic and enjoyable Instagram Reels. And the latest one, a filmy and guaranteed entertainer, is all set to drive away your Monday blues. Shot at 9:02 am, the Reels begins with an upset Genelia staring at something. In the background, we can hear a woman's voice and it goes like this, “Pareshan karta tha na mera bolna tumhen...To ab batao pasand aye meri khamosh.” Genelia dropped the Instagram Reels along with the caption, “Just Reel it feel it.”

Once an entertainer, always an entertainer this holds especially true in the case of Genelia. The stunning actress sure knows how to keep her fans and followers engrossed and we are here for it. Livening up the mood with every post she shares, Genelia's social media is the gift that keeps on giving. Previously, the gorgeous actress had posted a very relatable Instagram Reels that will most definitely appeal to you, if you have ever been left on read by your crush or someone special and have had them reply to you hours later. The actress posted the video along with the caption wherein she wrote, “Has to have happened to you at some point. Hai naa?” Relatable much?

Channeling her inner Geet, played by Kareena Kapoor Khan in the 2007 movie Jab We Met directed by Imtiaz Ali, Genelia posted a delightful video that will make you fall in love with her. “One of those “Main Apni Favourite Hoon” kinda mornings,” she wrote in the side note.

Giving us major couple goals, Genelia made our hearts melt with this adorable video featuring husband, actor Ritesh Deshmukh. The cute clip gave us a glimpse of what a lovely morning in the Deshmukh household looks like. In the video, Genelia is seen lying in bed with Ritesh cuddling his beautiful wife leaving her blushing. The adorable Instagram Reels received 1.4 million likes and Genelia posted it along with a sweet caption where she wrote, “Forever wali love story.” We most certainly believe in their forever love story completely, don't you?

Genelia made her Bollywood debut with the movie Tujhe Meri Kasam in 2003. She has also featured in movies like Jaane Tu Yaa Jaane Na, Masti, Tere Naal Love Ho Gaya, Force to name a few.