Not Summer, Isha Koppikar's Swimsuit Look Is Raising The Temperature

Isha Koppikar is raising the temperature with her summer swimsuit look 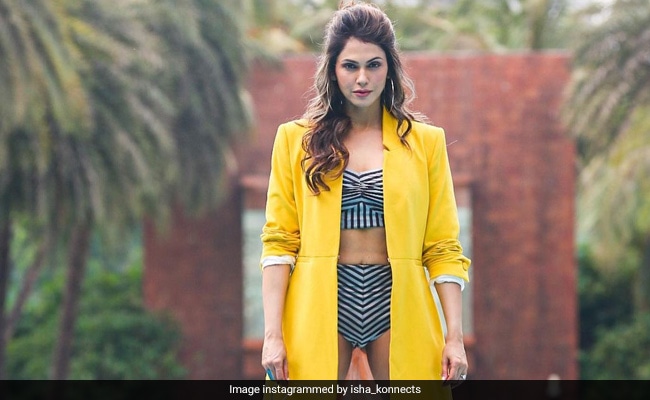 Summer is here! If you haven't switched on your ACs yet, you might want to do that soon because the temperature is going to rise in the coming days. For us, the mercury level has already gone up, all thanks to Isha Koppikar's Instagram post. On Wednesday, Isha treated her Instafam to her swimsuit photoshoot. In the photos, the actress can be seen posing in a black and white striped swimsuit against the backdrop of a swimming pool. She paired her swimsuit with a bright yellow blazer, golden knee-length boots, and transparent sunglasses. Isha looks stunning, we say.

The Ek Vivah Aisa Bhi actress wrote a quirky caption along with the pictures. She wrote, "I heard the temperature is going to be rising in the coming week, thought of rising it a little more."

An Instagram user called Isha Koppikar the "Wonder Woman" in her comment section. The actress replied to him saying, "I really wonder about this woman." We agree to the Instagram user that she is giving major Wonder Woman vibes in the photoshoot.

For those of you who don't know, the Instagram user was referring to the Wonder Woman, a fictional superheroine of the DC comics. The character also has her film series. Wonder Woman 1984, which is the second installment of the Wonder Woman franchise, was released last year. It was a sequel to the 2017 movie Wonder Woman. Actress Gal Gadot played the lead role in both films.

Coming back to Isha Koppikar, the actress has worked in films such as Pinjar, Dil Ka Rishta, Darna Mana Hai, Rudraksh, Krishna Cottage, Kyaa Kool Hai Hum, Salaam-e-Ishq: A Tribute to Love and Ek Vivaah... Aisa Bhi among others. Isha also appeared in the song Khallas from the 2002 film Company.

Isha Koppikar married a hotelier Timmy Narang in 2009. Their daughter Rianna was born in 2014.

"What Do Chair, Stairs And Trees Have In Common?": Aamir Khan's Daughter Ira Explains In Her ROFL Post