'No Bad Vibes': Alia Bhatt On Break-Up With Sidharth Malhotra

Alia Bhatt said, "Honestly, there will never be issues. We have witnessed several milestones of our lives together" 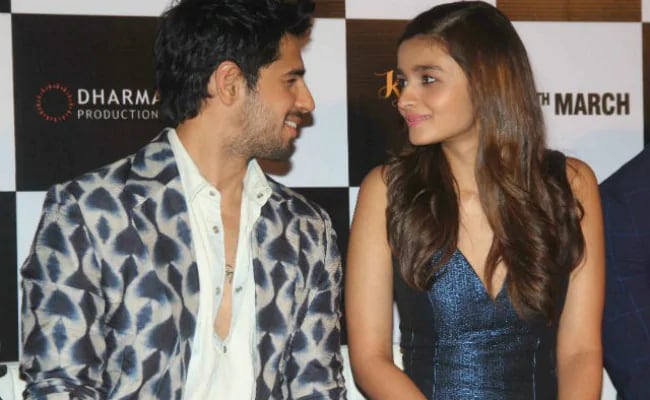 Sidharth Malhotra and Alia Bhatt at an event in Mumbai

After Sidharth Malhotra, Alia Bhatt also opened up about their break-up and told DNA that there are "no bad vibes" between them. A few weeks ago on Koffee With Karan 6, Sidharth said that there's no awkwardness between the two and added that haven't really caught up as such after the split. Alia and Sidharth debuted in the film industry together with 2012's Student Of The Year. They dated for a year before breaking up in 2017. "I have watched the episode. Sidharth and I did meet actually. They had shot the episode much before we met so he must have said that. But we have obviously met recently and it was extremely normal," Alia told DNA.

"I have a lot of love and respect for Sidharth. I have known him for a long time and there's too much history between us. Honestly, there will never be issues. We have witnessed several milestones of our lives together. There are no bad vibes," the 25-year-old actress added.

Recently, Alia and Sidharth flew to Delhi together as a part of the Bollywood delegation that met Prime Minister Narendra Modi. Ranbir Kapoor, who Alia is said to be dating currently, was also there.

Powerful and timely conversations can bring about change and this was one of what we hope will become a regular conversation. Meeting the Honorable Prime Minister @narendramodi today was an incredible opportunity. As a community, there is a huge interest to contribute to nation building. There is so much that we want to do. And can do and this dialogue was towards how and what ways we can do that. When the youngest country (in demography) joins hands with the largest movie industry in the world, we hope to be a force to reckon with. Together we would love to inspire and ignite positive changes to a transformative India. The film industry would also like to send a huge thanks for the GST reduction in movie ticket prices that was implemented recently! Thank you so much for your time, Sir!

On the Koffee couch, when Sidharth was asked about the rapport he shares with Alia, he said, "I don't think it's bitter. We haven't really met after that, to be honest. And it's civil. It's been a while and it happens... just like any other relationship. I have known her for much longer. I did know her much before, even before we were dating."

While dating, the former couple attended several showbiz parties together, including the grand birthday bash of Shah Rukh Khan, held at his Alibaug farmhouse.

On the work front, Sidharth Malhotra is currently filming Jabariya Jodi with Parineeti Chopra. Alia Bhatt's Gully Boy released recently. She has Kalank and Brahmastra in the pipeline.