Priyanka Chopra posed in a pretty yellow number and she captioned the photos: "Day at the office" 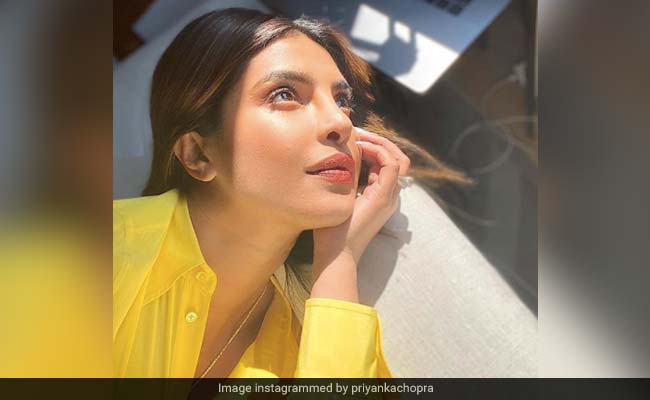 Actress Priyanka Chopra makes a case for yellow in her latest pictures on Instagram. The 38-year-old actress posed in a pretty yellow number and she captioned the photos: "Day at the office." Priyanka Chopra received compliments for her sun-kissed pictures from her colleagues including Mindy Kaling (she wrote, #HumanSunbeam") and husband Nick Jonas (heart emoticons often express way more than words) in the comments thread. Mindy Kaling co-stars with Priyanka in an upcoming wedding comedy produced by Universal Studio. Priyanka Chopra is currently busy publishing her memoir, titled Unfinished, and movies such as The White Tiger and We Can Be Heroes.

After the coronavirus outbreak, production of entertainment projects across the world were suspended and it resumed after months in July. Priyanka Chopra used the time in lockdown to complete her memoir, which she announced in 2018. "Finished. What an amazing feeling seeing these pages printed on paper for the first time. Unfinished coming soon," she wrote and shared a photo of her manuscript.

Finished. What an amazing feeling seeing these pages printed on paper for the first time! #Unfinished... coming soon! @penguinrandomhouse

Earlier this month, Priyanka resumed work on other projects too. She posted a picture of herself from inside an aircraft and captioned it, "Wanderlust." After that she shared a solo shot of herself from an outdoor trip.

In addition to The White Tiger and We Can Be Heroes, Priyanka Chopra has signed a multi-million dollar television deal with Amazon. Among her many projects with Amazon is Sangeet, horror film Evil Eye, and spy series Citadel, in which she'll co-star with Richard Madden. She has also reportedly signed up for Matrix 4.