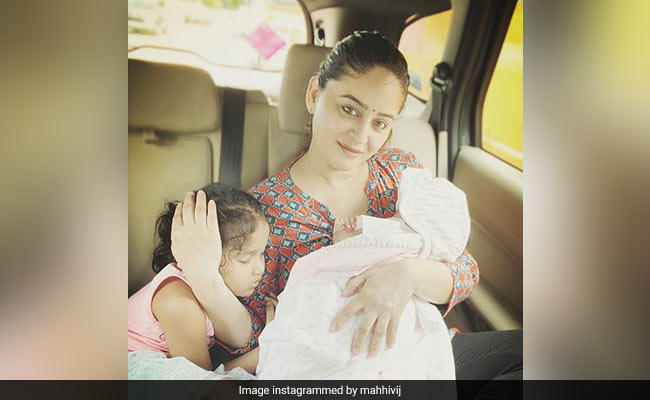 TV actress Mahhi Vij shared an absolutely adorable picture of herself along with her daughters. In the picture, Mahhi can be seen smiling with all her heart as she holds her baby daughter Tara in her arms while her elder daughter Khushi sits by her side in a car. Sharing the picture on Thursday evening, Mahhi described her daughter as the "best gift" and wrote: "When your prayers are answered god gives you the best gift called daughter. I feel blessed to be mother of two beautiful daughters." The picture received lots of love from Mahhi's Instafam. Comments like "so cute" and "touchwood" were frequently seen in the comments thread. TV stars like Aamna Sharif and Anita Hassanandani also commented on the actress' post.

Without much ado, take a look at Mahhi Vij's post here:

Mahhi Vij has been delighting her fans by posting oh-so-adorable photographs of her daughter Tara on her Instagram profile, which we simply love. Take a look at some of the posts here:

Now that we have the alphabet for our beautiful daughter please suggest a name starting from T or M. #names #daughter#love #babynamesuggestions @ijaybhanushali

Mahhi Vij and her actor-husband Jay Bhanushali welcomed baby girl Tara in August this year. The actress announced the arrival of her baby girl in the sweetest way possible. She shared a super cute video and she captioned it: "Twinkle twinkle little star, we made a wish and here you are. Thank you for choosing us as your parents. We feel complete. We are blessed with baby girl. Thank you god for everything this one is special thank you. We feel blessed. My best friend is here. Meri zindagi badal di."

Twinkle twinkle little star we made a wish and here you are.thank you for choosing us as your parents.we feel complete.We are blessed with baby girl thank u god for everything this one is special thank you.We feel blessed.My best friend is here.Meri zindagi Badal di I prayed for u my little angel thank u for coming n giving meaning to my life.so much to talk so much to give..

Mahhi Vij married Jay Bhanushali in the year 2010 after dating for several years. The couple had earlier adopted their caretaker's child in 2017 and have been taking care of the kids' education and upbringing. The couple participated together in Nach Baliye 5 and they even won the show.