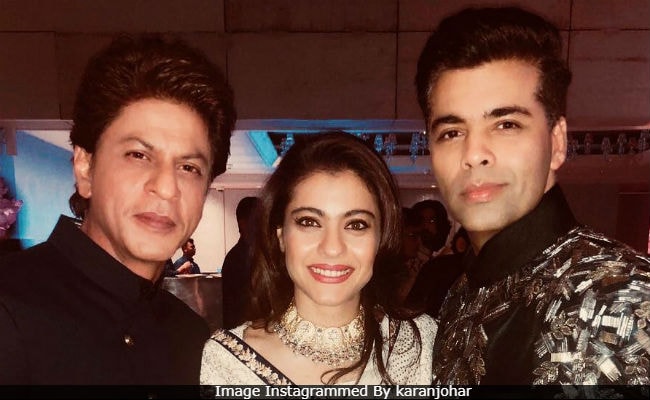 "Hope to see another film with this dream team" and "waiting for all three of you to work together again" are some of the comments posted on Karan Johar's picture with Shah Rukh Khan and Kajol, taken last night at Akash Ambani and Shloka's Mehta's engagement party. (Like everybody else, we also want to Shah Rukh and Kajol in another film of yours, Karan Johar). The picture has made the Internet very, very happy and in just four hours, it has got over 1.75 lakh likes. Karan Johar debuted as a director in 1998 with Kuch Kuch Hota Hai, starring SRK, Kajol and Rani Mukerji. Later, he made Kabhi Khushi Kabhie Gham... and My Name Is Khan with them. "Karan, please do new film with SRK and Kajol," another user commented.

And, Kajol shared this.

Kajol and Karan Johar had been friends for 25 years until in 2016 when they had a fall out over Ajay Devgn's Shivaay and KJo's Ae Dil Hai Mushkil box office clash. In his autobiography An Unsuitable Boy, Karan Johar blamed Ajay Devgn to be the reason behind Kajol and his fall out. However, the severe ties were apparently repaired last year, after folks noticed that Karan was following Kajol on social media. It is believed that Kajol had reportedly invited Karan to her birthday party last year and he obliged.

Meanwhile, Karan Johar has also treated us to a couple of wonderful pictures of Shah Rukh Khan's son Aryan from the party. Aryan made a rare appearance with his parents SRK and Gauri last night.

Thank you, Karan Johar for these pictures.