"In my mind, Sartaj Singh would be a tough guy. So I included some parathas in my diet and learned a little bit of Punjabi," said Saif Ali Khan 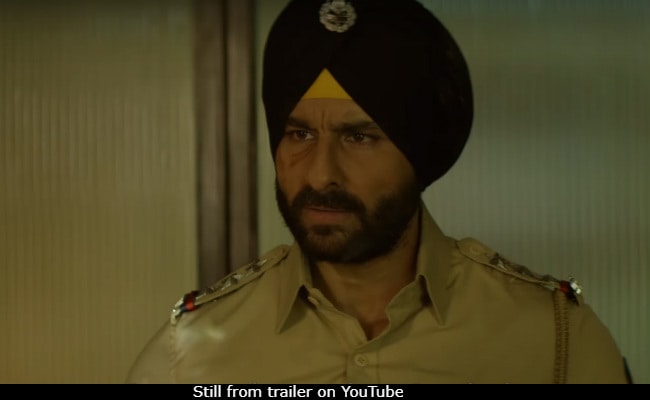 Saif Ali Khan stars in a new web show, Sacred Games directed by Anurag Kashyap and Vikramaditya Motwane. The story is set in Mumbai, it follows the life of gangster Ganesh Gaitonde played by Nawazuddin Siddiqui. Saif plays Sartaj Singh, a Sikh cop who has got in touch with Gaitonde. In this interview with NDTV, Saif speaks about his character, the new trend of web shows and how these platforms will not be a threat to cinema halls.

Q: Before doing a show on Netflix, were you watching any web shows?

Saif Ali Khan: "Yes, I did watch a lot of shows like Narcos, Crown, Stranger Things, House Of Cards, etc. I consume a lot of web shows, I like good content. I don't watch TV; I am a web show audience."

Q: So the show will just be available online. It won't be anything like your movie release where you can go to the cinemas and get reactions from people. There won't be ticket sales. How is all this different for you?

Saif Ali Khan: "I don't know it's new for all of us. I am guessing, it will be reviewed. It's a different platform for us like how theatre is one kind of a platform. This is something really cool, it caters to a vast audience. On the web, you get time to tell a story; it's a premium show. It's one more platform to be on, which can reach so many people at the same time. You will be compared to the shows from other parts of the world. There is an international tone to it. There's freedom of expression, which is something we are quite touchy about. We get a chance to do something of high quality work."

Q: Freedom of expression is very important, and this kind of a story needed just that. The way this gangster talks, it has a lot of abusive language. You think this kind of a story would be possible in Indian cinemas? Or is web the best platform because there is no censorship?

Saif Ali Khan: "Ya, I think it would be possible in cinemas too, apart from a couple of words here and there. We have our own struggles with our censorship, and we have reached somewhere, things get passed. There is red tape sometimes, and you have to go to a reviewing committee, but most of the time with an adult certificate you can tell your story the way you want. We just saw Veere Di Wedding had colourful language, but people felt it's right for girls to talk that way so it got passed and audience also accepted it. So here if we are telling the story of this gangster, Ganesh Gaitonde's language will be a certain way, the character will be violent, so a little bit of bad language might be required. It's up to the production house to be mature about that and not get over excited about it."

Q:Sacred Games is based on a very popular book by Vikram Chandra, have you read the book?

Saif Ali Khan: "I've read bits of it. I couldn't read the whole thing. By the time the book came to me, I had to read the script also, so it was one or the other, so I read the script. The book happens in the character's head; he is a passive character. They have changed it a bit. There is a short story called Love & Longing, which is very informative about Sartaj Singh, my character."

Q: For those who have not read the book, what kind of a cop and gangster chase is this?

Saif Ali Khan: "It's a perfect story to tell. For a Netflix original from India right at the start, this is what I would also pick. It's a vast story about a unique city. We were able to shoot all over the city because the digital equipment is light and very mobile, I don't think we could have done this a few years ago. This one story connects the mafia, underworld, cops, movie stars and politicians. The nexus of connection is interesting; a tight thriller about this big city coming to an end. This city is amazing, affluent people sit in their drawing room, and then you go to the kitchen and people working have a totally different existence, then you go down to the driver and he has his own story. There are multiple cities in this city, which sometimes we are unaware about."

Q: What kind of a cop is Sartaj Singh?

Saif Ali Khan: "In my mind, Sartaj Singh would be a tough guy. So I included some parathas in my diet and learned a little bit of Punjabi. I am used to hearing Punjabi; it's such a second language in the film industry. Heard it all my life but never spoke. There is a lot of drama in the role. This guy lives a sad life, he lives alone. He is addicted to sleeping pills in the day just to stay calm. His career is going nowhere, he is thinking about killing himself. He is under pressure to be corrupt."

Q: What was your reaction when you were informed that two directors would direct this show?

Saif Ali Khan: "I thought it's such a nice idea, what I am happy about is that they put their best directors forward. Often it happens that when you are experimenting with a new format, people would be like okay let's give this to our assistant to direct. Of course, this is for Netflix so they would put the best team and they did. Vikramaditya shot my scenes, and Anurag shot Gaitonde's story with Nawaz, which is a flashback set in the 80s."

Q: Every time Netflix releases a big show, the debate about streaming vs cinemas starts. Since this medium is reaching out to so many people, and it offers viewing shows and movies in the comfort of your home. Do you think it's a threat to the cinemas? Or do you think streaming apps and cinemas can co-exist?

Promoted
Listen to the latest songs, only on JioSaavn.com
Saif Ali Khan: "I don't think so, I feel they can co-exist. So many people consume this, whether on their way back to work, traveling by train they can watch this on their mobile or even in bed. And then there is a very communal experience to go to the cinemas. There are so many movies that you want to watch on the big screen so you will go to the cinemas for that. Also when you go to the cinemas with friends, you can make an evening of it. I don't think cinemas will have any kind of threat from streaming apps."